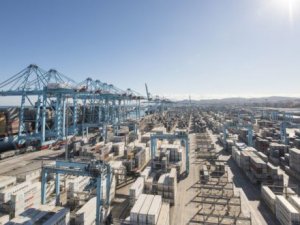 The departure of the United Kingdom from the European Union (EU), commonly referred to as Brexit, was initially planned for 29th March 2019. This was the result of the referendum held in June 2016. Having granted an initial extension until 12th April 2019

However, should the withdrawal agreement be ratified by the UK and the EU at any point before that date, the United Kingdom could potentially leave the bloc earlier. For Brexit to be cancelled altogether, a change in the law in the UK is required, for which there has not been sufficient support in the British Parliament. Finally, another Brexit extension is still legally possible, if all EU Countries, including the UK, agree to it. Up to date, there has been no decisive further progress in Brexit discussions in the UK to indicate the final outcome and the future scenario.

At Maersk, we are prepared for various Brexit outcomes, both from processes and IT systems perspective. These scenarios include a “No-Deal” option, any potential further exit deadline extension, as well as special “Norway-style agreement with the EU (where Norway is subject to some EU rules and regulations, without legally being part of the bloc).

What does a “No-Deal” Brexit scenario mean to you and your business?

Such departure from the EU will mean that the UK will no longer be subject to trade agreements between the EU and foreign countries and that trade between the UK and those countries will be subject to general rules of the World Trade Organisation, in case there are no other bilateral trade agreements in place. This will have impact on duties or tariffs, customs and many other procedures related with moving goods between the UK and other markets and will therefore also impact the transport and logistics sector.

Whether you are located in the United Kingdom or elsewhere, if your business relies on transportation of goods to or from the UK, after the Brexit date you might be impacted by the following:

Trade between the United Kingdom and countries of the European Union will no longer be treated as taking place within the same economic or customs area and will instead follow the same rules and regulations that apply for trade between the UK and any other third nation. Effectively, this will imply customs clearance and related documentation, application of duties and tariffs or more complex formalities compared to the trade between the countries within the EU.

Trade between the United Kingdom and third countries with which the EU has special trade agreements will no longer be subject to those agreements after Brexit. This will might imply less favourable terms for trading with these countries: higher duties, different or more complex procedures, etc.

One particularly important case to consider are situations when your goods have been expedited BEFORE the Brexit date, but are scheduled to arrive at their destination AFTER the UK has already left the EU. In such cases, they will be subject to new “post-Brexit” conditions upon arrival, which might differ significantly from the “pre-Brexit” terms and conditions.

Prepare your business for the UK leaving the EU– follow the information published regularly by the UK government on their dedicated page and stay informed on all the changes and additional requirements resulting from Brexit.

You can also read the guide put together by the Confederation of British Industry, advising businesses on the practical steps they can take to try and minimise disruption after Brexit.

Moving your cargo efficiently to and from the UK and giving you the peace of mind at all times regardless of Brexit remains our priority at Maersk.

Maersk connects Britain with the world with direct services and convenient transhipment options in major ports around the world, while Sealand – A Maersk Company offers a wide range of short-sea connections within Europe and Mediterranean. We are also happy to offer you comprehensive supply chain management solutions, along with other expertise – such as Customs House Brokerage, helping you plan your cargo deliveries efficiently despite administrative complexities.

This news is a total 430 time has been read
Tags: BREXIT , MAERSK LINE