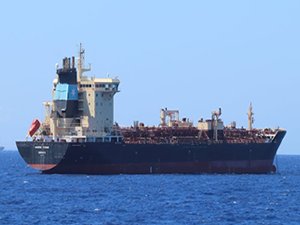 Maersk Tankers is speaking out about the ongoing situation aboard the product tanker Maersk Etienne, which is stranded off the coast of Malta with 27 rescued migrants on board.

One month ago, the vessel responded to a rescue request from the coordination center in Malta, but Malta will not allow the vessel to dock and complete the evolution.

The duration of the stay sets a new record for migrants held aboard a commercial ship, according to the vessel's operator.

“Maersk Etienne is a chemical tanker which is not equipped neither constructed to keeping people onboard.

This is a cargo vessel - the crew are professional seafarers and none of them is qualified for medical assistance or for care for rescued people,” said the vessel's master, Volodymyr Yeroshkin, in a video appeal released Friday. “We require immediate assistance.

These people have to disembark as soon as possible." Maersk Etienne has little passenger berthing, and the rescuees have been housed in impromptu arrangements, some of them on deck.

The tension has grown on board, according to Yeroshkin, and the crew is smaller in number than the migrants. Maersk Tankers' technical director, Tommy Thomassen, confirmed Thursday that the Maersk Etienne took on the rescue at the request of the Valletta Maritime Rescue Coordination Center in Malta, despite the Maltese government's assertions that it had not initiated the action.

"The company I represent has always done its duty: we don't drown people. But we thought that the situation would be resolved in a few days. We never thought we would stay like this for a month," Thomassen said.

Thomassen reported that diplomatic efforts to resolve the situation have not produced much in way of results.

"We will always save people. I assure you. That's what every decent shipping company must do . . . But now we expect the authorities to do their duty too. As we did," he said.

This news is a total 2024 time has been read
Tags: Maersk Tankers Speaks Out on Maersk Etienne's Indefinite Delay

Stena Bulk involved in onboard carbon capture projectThe Swedish tanker giant is working with the Oil and Gas Climate Initiative (OGCI), a voluntary energy major group, on a feasibility study to evaluate the technical and economic challenges involved when capturing carbon dioxide onboard ships while at sea

Forfeiture of Iranian Gasoline From Venezuela-Bound TankerAmerican authorities claim to have intercepted several shipments of Iranian petroleum in August 2020, forcing at least two vessels to bring their cargo to US ports.

FSO Nabarima With Severe List Off VenezuelaAn alarming photo is making the rounds on the internet today showing an idled Floating Storage and Offshore (FSO) vessel containing tens of million of gallons of oil with a severe list off the coast of Venezuela, raising fears an environmental disaster.

Maritime Comity: the first in a new series for Aurora TankersAurora Tankers is the shipping arm of the IMC Industrial Group. The Group’s beginnings go back to 1949 when the business was founded in Hong Kong by the late Tan Sri Frank Tsao, before International Maritime Carriers (IMC) was established in 1966.