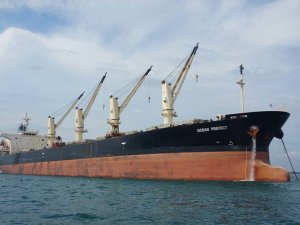 The 189-meter bulk carrier grounded on two separate occasions while approaching the Ahmed Bin Rashid Port on June 10 and June 11, 2017.

In the first grounding, the vessel was undamaged and was refloated 12 hours later. During a second attempted entry into the port the following day, the vessel again grounded but, despite the breaching of three ballast tanks, it continued to its berth.

Two harbor pilots were on board during the groundings. There were no injuries or pollution.

In the report, the MAIB listed the pilots “very limited local knowledge” and the effect of the tides as safety lessons learned from the accidents. The reported also said tidal stream data for the port’s approaches was “very limited”, and the positions of the navigation marks used to indicate the limits of the port’s approach channel were potentially misleading. The port in Umm Al Qaywayn also lacked resource and marine expertise, the MAIB report said.

The MAIB did not make any safety recommendations in view of the actions already taken.

This news is a total 770 time has been read
Tags: MAIB: Pilots’ ‘Very Limited Local Knowledge’ Led to Bulker’s Groundings in UAE