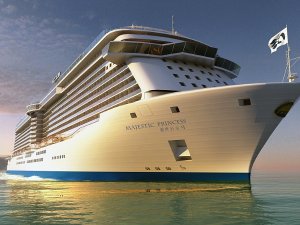 The California-based cruise operator Princess Cruises, part of Carnival Corporation, will deploy its newest ship Majestic Princess, on sailings to Europe in the 2017 cruise season before sending the ship to ply Asian waters.

Debuting in April 2017, the 3,560-guest Majestic Princess first sets sail from Civitavecchia, Rome, on April 4 for a five-day Maiden Adriatic Sea roundtrip voyage visiting Kotor and Corfu. The cruise ship will be deployed on maiden European sailings with five- to 28-day Mediterranean voyages from Barcelona, Athens and Rome.

“Princess is known for offering the best cruise itineraries around the globe and our 2017 Europe season is sure to inspire our guests with our newest and largest ships in the Mediterranean and Northern Europe,” said Jan Swartz, Princess Cruises president.

“We’re especially excited to debut Majestic Princess in the Mediterranean before she officially sails to Asia for her maiden China cruise season.”

The six cruise ships will sail to 119 destinations in the Mediterranean, Scandinavia, Russia, and the British Isles. New ports of call in the summer 2017 season will feature calls to Haugesund in Norway, Oban in Scotland, Siracusa in Sicily, Italy, Ulvik in Norway, and St. Tropez in France.