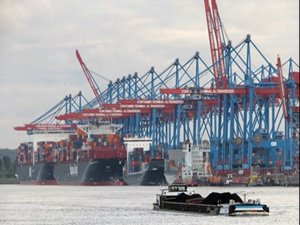 Customs officials in the port of Hamburg recently made one of the port’s largest drug busts. They discovered more than 1.5 tons of cocaine hidden in a container arriving aboard a ship from South America.

The police reported that the container had arrived aboard the CMA CGM Jean Gabriel. After being offloaded in Hamburg, the container was being stored in a container yard. It had been scheduled to be transshipped to Poland.

German investigators reportedly received a confidential tip about the drug smuggling operation and began a thorough search of the container yard. When this contained was examined at the city’s customs office investigators told the Hamburger Abendblatt newspaper that they discovered 47 large packages of cocaine hidden between sacks of rice coming from Guyana.

The investigators estimated the value of the cocaine at more than $350 million. They assumed after reaching Poland the drugs would have been sold in bulk and ultimately been on the streets across Europe.

Deutsche Welle, Germany’s international broadcaster, reported that this was among the largest quantities of cocaine ever seized in Hamburg. They reported that customs officers seized 4.5 tons of cocaine a year ago in another container in the port originated in Uruguay and being transshipped to Antwerp.

The customs officials said that this discovery was proof that the illegal narcotics business was continuing despite all the restrictions due to the global pandemic.

This news is a total 2874 time has been read
Tags: Major Drug Bust at Port of Hamburg