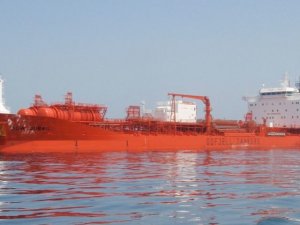 The Odfjell tanker Bow Jubail struck a jetty at the Port of Rotterdam, rupturing her hull and releasing an estimated 220 tons of bunker fuel into the water.

No injuries were reported, and she berthed without further incident.

According to a Reuters report, a clean-up operation was underway after an oil freighter punctured its hull while mooring, releasing a “considerable” amount of heavy fuel oil.

Odfjell, the owner of the freighter Bow Jubail, said in a statement the ship had lost 220 tons of heavy fuel oil in the incident, which took place Saturday afternoon.

Odfjell press release said that it caused a release of about 217 tons of heavy fuel oil (HFO) from the fuel tank inside. Mitigating actions were immediately taken to limit the spill, both by the vessel’s crew and by resources from shore. The leakage was stopped, and there is no risk of further spills. The incident happened on June 23rd at approximately 13:40 local time.

When the incident was reported, Odfjell immediately mobilized its Emergency Response Team at the headquarters in Bergen to support internal and external resources in bringing the situation under control. The vessel is insured by the P&I club GARD who has also mobilized resources.

Odfjell regrets the unfortunate incident and takes this matter very seriously. Together with GARD, Odfjell will cooperate closely with Dutch Authorities to ensure that necessary resources are available in taking the required actions and mitigate consequences of the oil spill.

We have established an Incident Investigation Team to identify the root courses. The team will also cooperate with the Authorities to establish relevant facts.

There are no personnel injuries. The vessel did not carry any cargo, and is safely moored at the Botlek terminal.

Bow Jubail has a total personnel of 29, of which 27 Filipinos and two Scandinavians. The vessel is a 37,499 dwt chemical tanker, managed by Odfjell Management AS and registered in Norway.

This news is a total 719 time has been read
Tags: Major Oil Spill in Rotterdam