Major Partnership For India and China in Transshipment 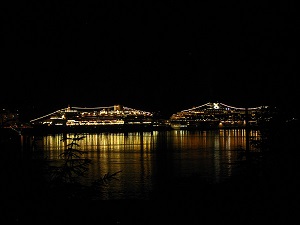 Over the past several years, the BRIC member nations of India and China have experienced vibrant economic growth.

While India develops a major transshipment port in their southwestern region, China has helped develop the transshipment terminal at nearby Colombo, Sri Lanka and is assisting the development of the Port of Gwadar at Pakistan. Despite economic rivalry between India and China, there appears to be prospects for the two nations to cooperate on civilian maritime trade transportation.

Over the past two decades, India and China have undergone significant economic expansion along with increased trade with other nations. While China developed deep water seaports at several locations to berth the largest container ships afloat, India had until recently delayed such development. When development of a transshipment terminal for mega-size container ships began at Colombo, Sri Lanka, it was thought that Indian exporters would move India’s international trade through that port. However, such a prospect had the potential to politically embarrass India’s national government that has jurisdiction over seaports, railways and airports.

Developing a seaport along India’s coast using domestic Indian resources, to berth the largest container ships afloat reasserted the political credibility of India’s government in such areas as transportation infrastructure development for assisting international trade. Such port development presents the potential to attract new industrial, business and economic development to the immediate vicinity instead of at the port of another nation. While there may be potential competition between the nearby Indian and Sri Lankan transshipment ports, there may also be prospects for India – China cooperation using those ports for competitively priced international ship transportation.

China’s development of their Silk Road initiative includes plans to build a ship canal across the Isthmus of Kra at Thailand, to bypass the Strait of Malacca and reduce sailing distance to/from Europe. By reducing China – India sailing distance, the Kra Canal development provides a basis for China and India to collaborate in international ship transportation to connect with their BRIC partner nations of Brazil and South Africa. South Africa’s economy is currently under-performing and may need to consider selling some of their seaports to China while Brazil is developing seaports to berth mega-size container ships.

International transshipment cooperation could involve smaller container ships sailing from multiple ports of origin located east of Sri Lanka and converging on the nearby Ports of Vizhinjam and Colombo to connect with mega-ships. Combined port cooperation would provide additional space to berth a larger fleet of interlined ships, with increased combined container temporary storage capacity and with the mega-ship berthing at both ports to load export containers or to unload import containers. Such cooperation would have the potential to influence future ship design to reduce per container transportation costs over and above present technology.

Combined China – India trade could sail aboard future larger ships via Cape Town to a Brazilian transshipment port and possibly even into the Gulf of Mexico at LIGTT that is under development near New Orleans. While a future Suez-max container ship could be built to a capacity of 28,000-TEU, cooperation between India and China in international container ship transportation could warrant future development of a Cape-max container ship of up to 35,000-TEU. Transshipment port cooperation could involve such ships being berthed at both Ports of Colombo and Vizhinjam on the same voyages to and from Brazil.

The close proximity of transshipment terminals Ports of Vizhinjam and Colombo allows for cooperation in ship transportation while also accommodating local and regional political sensitivities. Ships may sail between Ports of Gwadar and Colombo to transfer containers destined for markets in Africa, South America, North America and Western Europe. Ships may sail to ports of Vizhinjam or Colombo from ports in Malaysia, Thailand, Bangladesh, Indonesia, Singapore, Philippines, Taiwan and Southern China to transfer containers. While American tariffs could reduce China – America, container transshipment could reduce transportation costs of China-made goods to east coast North America.

Mega-ships destined for east coast North America and Brazilian ports could load transshipment containers at both Ports of Vizhinjam and Colombo, carrying trade from multiple counties that include India, China, Pakistan, Bangladesh, Myanmar, Thailand, Malaysia, Indonesia and other nations in the region. Transshipment would likely occur at North and South American terminals. Smaller ships calling at the either of the future companion transshipment terminals to interline with mega-ships and exchange containers, could also sail extended voyages carrying trade between smaller east Asian ports and east coast African ports. Cooperative transshipment would involve many sizes of container ships.

At the present time, very few container ports are able to offer 18-meter water depth at quayside. The few include Tangier, Louisiana International Gulf Transfer Terminal (U.S.) and Colombo with Vizhinjam on the horizon and future possibility at Hong Kong after dredging and deepening of the seafloor at quayside. Such seafloor deepening appears possible at Port of Pecem in Brazil, Busan in South Korea, Sydney and Mulgrave in Eastern Canada. The Port of Shanghai may need to consider future deepening of the seafloor. Hong Kong’s advantage is its close proximity to nearby ports of Shenzhen, Guangzhou, Canton and Macau.

For China – Europe low-priority container trade, Hong Kong could evolve into a transshipment port for a future generation of mega-size container ships that would likely sail the Hong Kong – Tangier and Hong Kong - Brazil services, with future expanded transshipment occurring at Port of Tangier and Port of Pecem. Combining future trade destined for east coast North America from both China and India on a single ship, along with trade from other nations in the region, could warrant the regular operation of a mega-ship of 18,000 to 23,000-TEU on the Asia – Suez Canal – Eastern Canada service.

The credibility of India’s national government depended on India being able to use domestic resources to develop a transshipment port for mega-size container ships along India’s coastline. There is potential for future international cooperation in container transshipment between the two ports that combines, offer the region space to berth fleets of ships at quayside with combined container storage capacity to undertake major transfers of containers. Mega-ships would likely call at both transshipment ports of Vizhinjam and Colombo on the same outbound and inbound overseas voyages. The main benefit of cooperation is to lower per container transportation costs.

Cooperation between the ports of Colombo and Vizhinjam could provide the necessary market for larger container ships, especially if when following the completion of twin navigation channels, Suez Canal were to allow passage to larger container ships of up to 28,000-TEU. Carrying combined container loads on the Asia – Brazil service could warrant future development of container ships of up to 35,000-TEU. China and India along with the surrounding region could benefit greatly through port cooperation and allowing more of a free market to prevail in international ship transportation.