Major Tanker Fire After Collision With Barge Near Shanghai 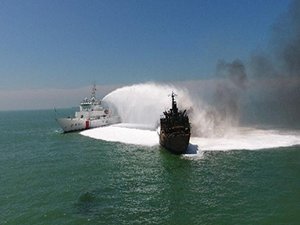 14 crewmembers are missing after a collision between a tanker and a small freighter just outside of the Yangtze River estuary, near the port of Shanghai.

At about 0340 hours local time on Thursday morning, a laden product tanker collided with a cargo ship carrying sand and gravel, maritime officials told state-owned Global Times. The cargo ship sank and the tanker - which was carrying about 3,000 tonnes of gasoline - caught fire on deck.

According to CCTV News, SAR teams have rescued three seafarers who fell into the water. Two of the survivors were crewmembers from the sand and gravel vessel and one was member of the tanker's crew. The latter crewmember has been evacuated to a hospital for treatment for burn injuries.

14 out of a total of 17 seafarers from the two vessels are still missing, including one crewmember from the gravel vessel and 13 from the tanker.

No significant pollution has been reported, but skimmers are standing by if required, CCTV said. The cause of the collision is under investigation.

The Yangtze is the world's busiest waterway by tonnage, according to the Chinese government's calculations, handling about 2.3 billion tonnes of cargo annually on countless foreign and domestic voyages. The lower segment of the river is China's busiest waterway and accounts for the majority of the Yangtze's traffic.

This news is a total 3431 time has been read
Tags: collision, fire incident, port of shanghai, Tanker Catches Fire off Port of Shanghai, 14 Missing