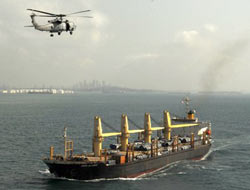 Militants could hijack a ship carrying hazardous material or use a vessel as a weapon to hit port and land facilities, Inspector General of Police Musa Hassan told law and shipping officials from more than 30 countries at an ocean security conference.

Maritime terrorism is a "threat which is real and possible that is lurking in the straits," Musa said. "The straits must be kept open and safe, and the prime responsibility is with the three littoral states of Indonesia, Malaysia and Singapore."

The 900-kilometer (550-mile) -long strait between peninsular Malaysia and Indonesia's Sumatra island has been notorious in the past for robberies by sea pirates, who can hide amid narrow channels, shallow reefs and thousands of tiny islands.

"Anyone considering this should think again, hundreds of times, before acting," he told reporters.

Pirate attacks in the waterway — through which half the world's oil trade and a third of global commerce pass — have declined in the past three years after Malaysia, Indonesia and Singapore introduced coordinated security patrols. There were 11 attacks last year, down from 12 in 2005 and 38 in 2004.

Nevertheless, concerns still linger over the safety of some 200 ships that use the Malacca Strait every day to travel from Europe and the Middle East to Asia, Musa said, noting there have been fears that terrorists could try to "commandeer a ship transporting liquefied petroleum gas for a suicide mission."

"The use of a ship as a weapon in the manner of the (Sept. 11, 2001) attacks is a troubling scenario," Musa said. "It would mean rerouting the vessels, which would lead to the skyrocketing of freight and insurance rates, and which will lead to a devastating global economic impact."

An attack in the strait could also choke Asia's oil supply, Musa said.

Indonesian officials have said regional terrorism remains a risk because of Jemaah Islamiyah, a loose militant network that has been implicated in attacks such as the 2002 bombings on Indonesia's tourist island of Bali that killed 202 people and other strikes on Western targets, most recently in 2005. But the group has been weakened by scores of arrests and raids, analysts say.

"We're aware of the possibility. We cannot ignore it, but we shouldn't hype it up," Mukundan said.

This news is a total 801 time has been read