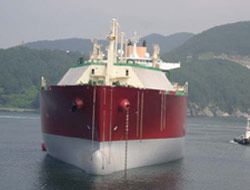 The three new ships are part of a Qatargas package of 45 LNG carriers with MAN B&W two-stroke prime movers.

The three new ships are part of a Qatargas package of 45 LNG carriers with MAN B&W two-stroke prime movers.

Three of the world"s largest LNG-carriers successfully tested their propulsion packages at the end of last month. Each vessel is powered by two 6S70ME-C electronically controlled, two-stroke, lowspeed diesel engines, and this event marks a first for MAN Diesel in the LNG sector. The engines will operate on HFO. The vessels are part of a Qatargas project that comprises an impressive 45 vessels, each fitted with two MAN B&W low-speed prime movers, making for a grand total of 90 electronically controlled two-stroke engines. Of these, 31 QFlex carriers will receive two MAN B&W 6S70ME-C engines, each developing 18,660 kW, while the 14 larger QMax carriers will employ two MAN B&W 7S70ME-C engines, each rated at 21,770 kW at 91 rpm.

The three ships in question have been delivered from three different shipyards. The ?Al Ruwais? comes from Daewoo Shipbuilding and Marine Engineering and is owned by German PRONAV. The ?Ternbek? is from Samsung Heavy Industries and is owned by the U.S. Overseas Shipholding Group. The third, the ?Al Gattara?, is also owned by the Overseas Shipholding Group and built by Hyundai Heavy Industries. Doosan Engine Co. Ltd built the engines for the Daewoo and Samsung-built vessels, while HHI-EMD built the engines for the Hyundai-built vessel.

The vessels have also been fitted with four MAN Diesel 9L32/40 gensets each. STX Corporation built those for the DSME and Samsung vessels, while those on the Hyundai vessel were built by Hyundai itself.

The HFO-fuelled, ME-C engines chosen to propel the 45 ships comprise a part of the MAN B&W two-stroke engine programme that also includes a range of dual-fuel ME-GI engines. The GI-system, comprising a high-pressure injection system of natural gas, has proved commercially viable since 1994 when a 12K80MC-GI engine was employed by a Japanese power plant. Conversion to dualfuel operation, in the form of ME-GI, is an option currently being discussed for both the Qatargas and other LNGcarrier projects.

The ME-GI system is offered in a package based on Burckhardt compressors with a fully integrated tankpressure and gas-flow control system. The ME-GI range of low-speed, dual-fuel engines complements MAN Diesel"s engine programme that also includes the 51/60DF dualfuel, medium-speed engine, which is targeted at smaller LNG carriers in an electric-propulsion configuration.

This news is a total 2541 time has been read