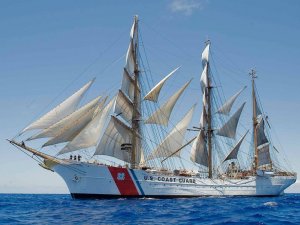 A crewman on board the U.S. Coast Guard Cutter Eagle reportedly fell overboard during a visit to Ireland Tuesday morning.

We reached out to the U.S. Coast Guard for comment but so far no response.

The 250-foot Barque Eagle is used as a sail training ship by the U.S. Coast Guard Academy in New London, Connecticut. The ship is scheduled to be in Dublin, Ireland on Friday before heading to London, and Portugal in June.

This news is a total 3782 time has been read
Tags: Man Overboard from U.S. Coast Guard Sail Training Ship ‘Eagle’ in Ireland