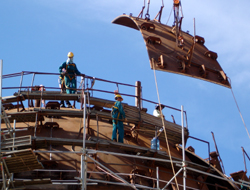 The company announced it would end engine production in Frederikshavn by May 2010, resulting in up to 500 redundancies.

The facilities will focus on its after sales servicing and assembling propulsion systems businesses.

The announcement comes shortly after the company ceased building its own large slow-speed engines to rely solely on licensees, mostly Chinese and South Korean engine makers, to build its designs.

The smaller of the company"s medium-speed engines will now be built either at the company"s remaining engine factories in Germany and France or similarly with licensees.

?[The small-engine orderbook] will run out in the beginning of next year and prices will be lower so it will be impossible to maintain production in Frederikshavn,? said MAN Diesel head of slow-speed Thomas Knudsen.

He said he had spoken with union officials to appraise them of the situation in Denmark.

Mr Knudsen added that a build-up of capacity for both low- and medium-speed engines meant that there would be pressure on prices in the future.

?In the long-term perspective we do not believe the market will come back for the smaller medium-speed engines in Europe,? Mr Knudsen said.

Demand for these smaller units, mostly used as onboard generators, is likely to remain low and production will be focused in Asia.

?We will be able to purchase engines much cheaper and it will be impossible for us to sell without loss,? he said.

The orderbook for the slow-speed engines is more healthy, full to 2011, so the prices for these are unlikely to drop as much, Mr Knudsen added.

MAN has a larger number of people employed in manufacturing in Denmark than the majority of other maritime engineering firms.

Other companies have yet to make announcements of major cutbacks, but this was likely happen, said Thorkil Christensen, managing director of Danish Maritime ? the country"s manufacturers" and suppliers" association.

During the rush for yard space during the boom, many orders were placed only once the engine had been confirmed.

Mr Christensen said this meant that the engine was ordered at the same time or before the vessel.

Other components were then ordered according to the shipowner"s preferred supplier list. The result has been that while engine makers have been hit by cancellations, the majority of other suppliers will be further affected by the lack of new orders moving forward.

He said that companies with operations in both the newbuilding and the maintenance sectors would fare better during the crisis than those dependent on getting newbuilding orders.

However, Holland Marine Equipment director Martin Bloem said that some companies had been able to fare better recently due to their focus on the more specialised shipbuilding markets.

Dutch yards have a relatively healthy orderbook, he said, with dredgers, luxury yachts and other specialised vessels. This was helping the region to overcome the worst of the market, although those companies with a strong focus on exports were the ones worst hit.

?But what we will probably see is that those companies with a strong export focus in the Far East, which are suffering now, will be the ones first to profit when the market changes,? he said.

But he confirmed that some of the smaller companies, especially those with a turnover under ?70m ($101m), had been facing acute challenges. Two declared themselves bankrupt, but one has since restarted work while the other has been bought out by a larger company.

This news is a total 2898 time has been read