Man whilst protecting the seas 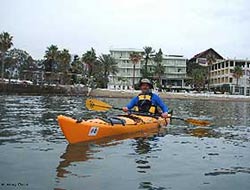 Honoring a man whilst protecting the seas

The approximately 3,500 kilometer long route consists of 11 legs on the western coasts of Turkey. The expedition started on May 7 in ?skenderun and following three weeks of kayaking, is now in Mersin. They are sailing 24-25 nautical miles a day, which is about 40 kilometers almost double the distance previously planned.

Captained by Jason Hayward-Jones, the crew also consists of two members of the SAD, working in tandem. A third kayak is about to be added to the team, but the crew insists that they are open to any local sailor that would like to join.

However, Canip Baran, the ground coordinator, complains about the lack of interest. He is well aware that balancing on kayak needs experience but also asserts that it can be learnt easily and it should spread. Kayaks are convenient, not expensive and very environment-friendly, as they do not use fuel.

Conditions in the Mediterranean Sea are difficult for kayaking, because the temperature reaches 40 degrees Celsius in the summertime and streams can rock the kayak. Thus, they keep in touch with the Turkish Coast Guard Command. GPS and radio are a few of the equipment on the kayaks, apart from water, snacks, a substitute paddle and life jackets.

On the bright side, a kayak can enter the narrowest caves, bays and the shallowest parts of the sea. The crew starts the day at 6:00 a.m. and sails until noon. Then work on the ground begins.

The paddling is also being done in order to raise awareness for the protection of Turkey's seas. The crew will make observations and organize events showcasing environmental problems threatening Turkish seas and shores.

”This is not an expedition of adventure,” says Baran, “The sight that we experienced was not heart warming at all. The life in our seas is coming to an end.”

The pictured expedition diary is being shared with aficionados of the sea on the Web site www.sahilkesif.org.

If everything goes to plan the Conquest Coast Expedition will end on Sept. 20, at the Kalam?? Marina. However, the schedule does not really matter.

“There may be times when the crew is tired, not physically but mentally because it is a long marathon,” states Baran, “You cannot just sit and eat a whole elephant. You have to be patient and go gradually and take your time to reach the end. That is the case with us.”