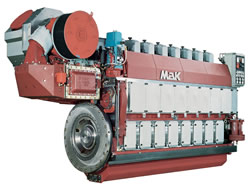 With the implementation of IMO II regulations for the marine industry on 1 January 2011, marine engine manufacturers are finalizing strategies.

With the implementation of IMO II regulations for the marine industry on 1 January 2011, marine engine manufacturers are finalizing strategies.

With the implementation of IMO II regulations for the marine industry on 1 January 2011, marine engine manufacturers are finalizing strategies and development for modifications on engines to meet the strict requirements.

Caterpillar Motoren, the manufacturing arm of Caterpillar Inc which manages the manufacture of MaK engines, has been working for nearly three years on a strategy for each of its four medium speed engine series.

Now, nearly six months before the enactment of the IMO regulations, Caterpillar Motoren is announcing the advance availability of the IMO II compliant configuration of the M 20 C medium speed engine. After months of focused work on the smallest MaK engine series, the M 20 C is available for purchase globally in both 6 and 8 cylinder configurations, both which meet the IMO guidelines. Based on the configuration, the M 20 C engine will produce between 1,020 and1,520 kW at 900 to 1,000 rpm and is capable of operating on Heavy Fuel Oil (HFO) or Marine Diesel Oil (MDO).

Manufactured at the Kiel Engine Center in Kiel, Germany, the M 20 C has been a very popular engine for a variety of tug and fishing applications around the world due it its high power output at a relatively small footprint. Since its initial manufacture in 1992, more than 1,200 M 20 C engines have been manufactured and sold through the global MaK dealer network.

To meet the additional regulations, which are aimed at reducing engine emissions, specifically NOx, MaK engineers were able to make minor modifications to the engine to achieve the desired emission levels. The focus of the design changes to the engine is the injector pump, depending on the application, which was redesigned with a new plunger for emission optimization in alignment with new timing for fuel injection, combustion inlet, and exhaust outlet. Additionally, the IMO II compliant configuration utilizes redesigned gas piping to optimize the flow of exhaust gas. In the end, these engineering changes will ensure full compliancy without sacrificing efficiency or reliability for Fixed Pitch Propeller (FPP), Controllable Pitch Propeller (CPP), or variable speed auxiliary and generator set configurations.

Along with newbuilds coming from the Kiel Engine Center, a retrofit kit is also available for existing 6 or 8 cylinder M 20 C customers who are looking to meet the IMO II regulatory requirements.

The other MaK medium speed engine series are currently in the testing phase of the New Production Introduction (NPI) process and will be fully IMO II complaint and available for sale worldwide on by the end of this year.

This news is a total 4719 time has been read