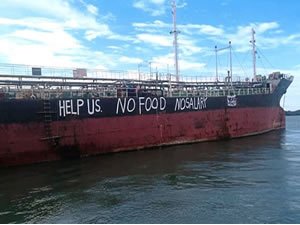 Cases of desperate shipowners abandoning their vessels and crews last spiked in 2017, but the number of incidents is now heading back up.

Cases of crew abandonment are on the rise again, albeit the world has been given far greater transparency on where these despicable acts are taking place thanks to the enterprising work of a British sister and brother.

Cases of desperate shipowners abandoning their vessels and crews last spiked in 2017, but the number of incidents is now heading back up.

A map has been created showing every abandoned case around the world as tracked by the official International Labour Organisation database on the matter, supplemented by cases that have been reported in the media. The map was created by Periplous, a research space run by Matthew and Eliza Ader, a brother and sister team from London.

The pair carry out open-source investigations into a variety of issues with a current focus on seafarer abandonment.

The pair were inspired to carry out the project after reading Ian Urbina’s bestseller The Outlaw Ocean, which chronicles crime and survival on the high seas.

The map, which went live in September this year and is updated every month, shows hotspots for crew abandonment at the moment include Sharjah, Istanbul, and Malta. While the numbers have stayed steady around the 35 mark since 2017, this year already has seen 45 active cases as tracked by the ILO plus another four added to the Ader database.

Nearly half of these cases were added to the Periplous database in the last month and a half. These new additions include seven tankers belonging to Palmali Shipping, a Turkish-Azerbaijani company registered in Malta whose CEO and founder was arrested in March for connections to the 2016 Turkish coup attempt.

“Seafarer abandonment is a grievous violation of worker’s rights compounded by a lack of attention and what appears to be a level of institutional acceptance by certain actors,” commented Matthew Ader.

Despite efforts by local authorities to stamp out the practice in recent years, the United Arab Emirates (UAE) remains the number one spot for abandoned ships, led by Sharjah.

The UAE accounts for 12% of the global total, according to Periplous data. In terms of nationalities, Indian seafarers have suffered the greatest number of abandonment cases followed by their Ukrainian counterparts. For more details on individual cases, click on the map below.