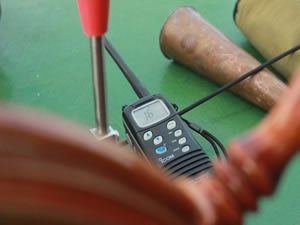 The MSIB was issued in response to the discontinuation of the Sea Tow-operated Automated Radio Check System, which was available on VHF Channels 24 to 28 for the benefit of mariners in over 130 locations. The service will be discontinued starting October 2, 2020.

For several years, Sea Tow operated an Automated Radio Check System, which was available on VHF Channels 24 to 28 for the benefit of mariners in over 130 locations.

However, on October 2nd, 2020 that service was discontinued.

HOW TO TEST A VHF RADIO USING RESCUE 21:

The U.S. Coast Guard continues to offer an automated Digital Selective Calling (DSC) Test Call capability from each of its Rescue 21 coastal stations.

All fixed mount marine radios certified by the Federal Communications Commission since 1999 are required to have a DSC capability. All such radios sold since 2011 must also have a DSC test call capability.

Marine radios transmitting and successfully receiving a response from a DSC test call can be expected to operate acceptably in the voice mode as well.

Once entered and stored, a DSC test call can be made by executing the following three

The radio display should indicate when that test call is acknowledged and display the acknowledging station’s nine-digit identity. That identity may be different than the group identity previously entered into memory.

VHF Channel 16 is not for the purpose of radio checks. Please use VHF Channel 09, which has been designated by the FCC as a boater’s calling channel.

This news is a total 1392 time has been read
Tags: VHF CHANNEL , TEST A VHF RADIO USING RESCUE 21 , MSIB