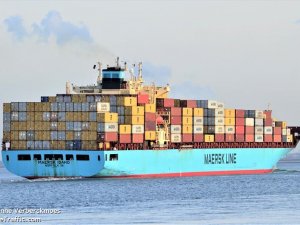 Mariners onboard the U.S.-flagged MV Maersk Idaho have tested positive for COVID-19 in what is thought to be the first reported outbreak of the virus on an American commercial ship.

A statement from the shipping company, Maersk Line, Limited, said a crew member was admitted to a local hospital with pneumonia-like symptoms upon the vessel’s arrival in Newark, New Jersey on June 19 following a transatlantic voyage.

The mariner has since tested positive for COVID-19 and remains hospitalized in stable condition.

“The vessel captain reported that the mariner had not been ashore since joining the vessel in mid-April. Prior to knowledge of the mariner testing positive for COVID-19, the vessel had departed for Norfolk where it has taken a position at anchorage outside the port,” the statement from MLL said.

Additional medical testing of the crew has revealed that nine additional crew members have tested positive for the virus. All nine are reported to be asymptomatic.

The Maersk Idaho currently remains at anchor off the coast of Norfolk.

“Pursuant to a plan approved by the US Centers for Disease Control and Prevention (CDC), the USCG, as well as other state and local authorities, MLL will soon begin evacuation of the current crew to a quarantine facility, sanitizing the vessel, placing a new crew on board, and commencing the port call to conduct cargo operations,” MLL said.

According to MLL’s website, the 4,658 TEU MV Maersk Idaho arrived at Newark from Bremerhaven, Germany, with previous calls in Rotterdam and Antwerp.

Maersk Line, Limited is the U.S.-flag arm of Danish shipping giant A.P. Moller – Maersk. With a fleet of 20 vessels, it provides international transportation services for the U.S. government through its participation in both the Maritime Security Program (MSP) and Voluntary Intermodal Sealift Agreement (VISA), among other customers.

This news is a total 1618 time has been read
Tags: coronavirus, maersk line limited