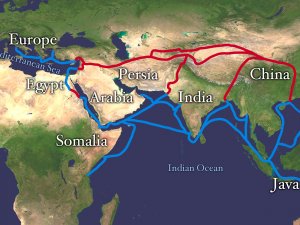 China’s Maritime Silk Road (MSR) initiative could greatly benefit Indonesia should it be aligned with the idea initiated by the Indonesian president, Joko Widodo, to make the archipelago nation the world’s maritime axis, analysts said.

“Maritime highway is actually not a new thing as it is very much reminiscent to Indonesia’s ancient history which has excellent maritime transport serving islands across the country during the old kingdom era. Until the 15th century it served as a trade crossroads for India, China, Africa and Arab countries,” Umar Juoro, an Indonesian economic and development analyst said Thursday in an exclusive interview with Xinhua in his office.
Umar who heads fellow analysts at the Habibie Center and as member of the director’s board at the Center of Indonesia Development and Economics Studies (CIDES) said that the intense maritime trade with China and Arab countries had even shaped cultures of Indonesian kingdoms and people living in coastal areas at that time.
The advanced maritime connectivity continued during the Dutch colonial period as they built seaports across Indonesia to transport tobacco, spices, rice and other agriculture commodities directly from most of those seaports to Europe, Umar added.
“The ship transportation and port infrastructure built by the Dutch colonists was apparently effective, efficient and lucrative. But after independence, Indonesia never built seaports. The central government in Jakarta made it so ports in the region could no longer move cargo and people to foreign countries,” Umar said, adding that government appointed Jakarta’s Tanjung Priok as the only seaport for such activities.
Umar said that as demand increases, the Indonesian government has initiated plans to build more seaports and other infrastructure to facilitate investors planning to invest in the country that would eventually help the largest economy in Southeast Asia pursue higher growth.
The then government has initiated it with a master plan to accelerate economy development across the country by building seaports, power plants and airports.
The idea has been continued by the current government led by Widodo who plans to advance maritime transport through the construction of 24 seaports across the country, requiring 700 trillion rupiah (US$55.4 billion).
If the idea is successful, it may help the nation attain 7% growth, from the average of 6.5%-6.7%.
President Widodo has promoted the idea in several international forums he attended previously, seeking investors who were willing to support it.
Indonesia’s maritime transport is now facing ineffectiveness as Tanjung Priok seaport cannot accommodate very large inter-continental cargo ships that can directly sail to Europe and the United States.
Shipments to Indonesia from Europe and the United States have in the past been facilitated by ports in Singapore and Port Klang, Malaysia which are then later on transported by smaller ships to Indonesia.
The construction of new seaports installed with modern facilities in several regions across the country would help boost industrial activities in areas other than Java and Sumatra that hold 70% of the nation’s GDP.
Umar expects that the possible integration of the Maritime Silk Road and Indonesia’s global maritime axis would also bring benefit in Indonesia’s investment sector.
“As long as it is based on rule of law, I kind of support the idea of MSR integration with Indonesia’s maritime axis idea,” Umar said, adding that the two ideas were actually complimentary.
Cornelis Luhulima, an analyst at the Indonesian Institute of Science (LIPI), in his recently published analysis said that Indonesia’s maritime highway plan could be part of the Maritime Silk Road in the 21st century.
“Interoperability levels of the east-west direction in Indonesia will be strengthened, further promoting the growth of Indonesia’s marine economy,” he said.
“The alignment of Indonesia’s maritime highway into the Maritime Silk Road would create a super highway in the sea. China financial strength will ensure the promotion of the Maritime Silk Road Initiative, while Indonesia’s maritime highway program would inevitably favor China’s interest,” Luhulima said.

This news is a total 10371 time has been read
Tags: maritime silk road