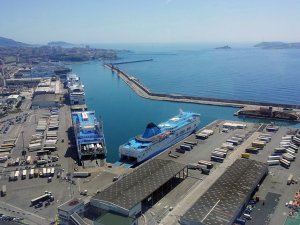 The Port of Marseille Fos has unveiled a new eco-friendly initiative that supports the port’s goal of becoming the Mediterranean’s first fully electric port by 2025.

The Port of Marseille Fos has unveiled a new eco-friendly initiative that supports the port’s goal of becoming the Mediterranean’s first fully electric port by 2025.

As disclosed, the port authority plans to spend EUR 20 million (USD 22 million) over the next six years to extend shoreside electrical connections for berthed vessels to every ferry, cruiseship and repair quay within the Marseille eastern harbor.

Already available on the Corsica ferry quays, the network will be expanded in two phases to cover North Africa ferry quays and the ship repair hub by 2022 and the cruise terminal between 2022 and 2025.

The zero-emissions investment — backed by the national and regional government — is aimed at improving the city’s waterside air quality while maintaining the port’s value to the economy.

“We are convinced that ecological transition is the springboard to economic growth. That’s why we are investing heavily to become the Mediterranean’s first 100% electric port by 2025,” Hervé Martel, CEO of Marseille Fos, commented.

Together with twelve other partners, the Port of Marseille Fos is also participating in a three-year research program exploring the commercial potential of recycling untreated industrial CO2 emissions via a new seaweed-based biological process to produce biomass energy.

The Port of Marseille Fos is the largest port in France and the second-largest in the Mediterranean. For access to the French and European markets, it is seen as the southern alternative to the northern European ports.

This news is a total 272 time has been read
Tags: CEO of Marseille , Port of Marseille, largest port , second-largest in the Mediterranean.