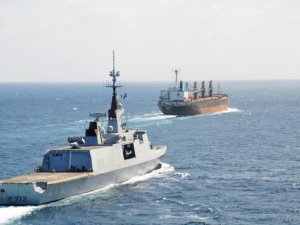 Armed pirates attacked a Marshall Islands-flagged oil tanker in the Bab-el-Mandeb Strait connecting the Red Sea and Gulf of Aden on Wednesday, the latest in a spate of attacks off the Horn of Africa.

The European Union Naval Force ATALANTA (EU NAVFOR) confirmed that an oil tanker was approached and fired upon by three men in a skiff in the southern part of the Bab-el-Mandeb Strait. EU NAVFOR did not disclose the identity of the tanker in the attack, but media sources indicate that the vessel is the 2003-built tanker MT Muskie.

According to EU NAVFOR, the vessel’s master reported that his vessel was fired upon by three rocket-propelled grenades, before the assailants broke off the attack. The tanker is now safe and en route to its next port, it has been confirmed.

EU NAVFOR added that Wednesday’s incident took place in area not traditionally used by Somali-based pirates to attack merchant ships, and says it is liaising with naval force partners in the region in order to gather more information and assess the exact nature of the incident.

“EU NAVFOR has not received any information that confirms that piracy-related tripwires/equipment were observed during the attack,” said EU NAVFOR Spokesperson, Commander Jacqui Sherriff. “This indicates that the incident is more probably related to the continuing instability at sea off the coast of Yemen. That said, masters of merchant vessels transiting the piracy high risk area are reminded to remain vigilant, adhere to Best Management Practices (BMP) and to report any suspicious activity at sea to the UK Maritime Trade Operations (UKMTO) centre.”

Yemen’s worsening conflict is said to be contributing to the recent spike in piracy in the region. “The regional instability caused by Yemen is important,” Colonel Richard Cantrill, chief of staff with the European Union’s counter piracy mission EU NAVFOR, told Reuters earlier this month.

So far in 2017, there have been at least ten piracy-linked events in the HOA region reported by EU NAVFOR, including at least 2 hijackings of smaller vessels.

This news is a total 827 time has been read
Tags: Marshall Islands-Flagged Oil Tanker Attacked by Pirates in Bab-el-Mandeb Strait