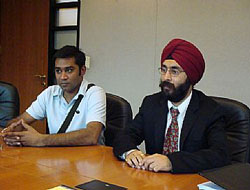 Transport workers in India are organising a mass action next week in opposition to the judgement.

Transport workers in India are organising a mass action next week in opposition to the judgement.

Transport workers in India are organising a mass action next week in opposition to the judgement against the two Hebei Spirit seafarers, who were last week given prison sentences.

A number of unions ? the National Union of Seafarers of India (NUSI), the Maritime Union of India (MUI), the Transport and Dock Workers" Union, the All India Railwaymen"s Federation and the Aviation Industries Employees" Guild ? along with the ITF, shipowners" associations and nautical institutes decided to organise a rally as part of an overall strategy to support Captain Jasprit Chawla and Chief Officer Syam Chetan. Chawla and Chetan were sentenced to 1.5 years' and eight months' imprisonment respectively despite being previously cleared of all charges of causing an oil spill a year ago in South Korea. The spill occurred when a crane barge owned by shipbuilding firm Samsung Heavy Industries, part of the Samsung Group, collided with the tanker.

The strategy was discussed at a meeting on 15 December. There participants decided to take a number of steps to support the men, including organising a rally on 23 December in Mumbai, which members of the men"s family will also attend; similar demonstrations are planned in Chennai and Delhi. They are also appealing to seafarers to review decisions regarding purchasing Korean products, particularly those produced by Samsung, and demanding the Indian government take steps to help secure the men"s release.

On 17 December a joint delegation involving the NUSI, the MUI and three ship owners" and managers" organisations met the Minister for Shipping and Transport in New Delhi to call for government intervention.

Abdulgani Y Serang, NUSI General Secretary, said: ?The demonstration is for justice and the release of the two seafarers of the ship Hebei Spirit who are victims of the criminalisation of seafarers. This issue is no longer national but has become international.?

S S Khan, MUI General Secretary, added: ?If these efforts do not produce the required results then we will further intensify the action, which could affect the transportation of Korean goods in India.?

This news is a total 1288 time has been read