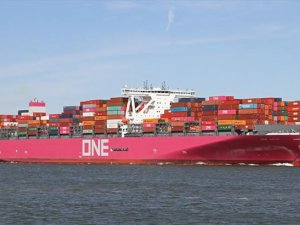 Yesterday we reported that the containership ONE Apus lost a “significant” number of containers overboard during a storm in the mid-Pacific. Today we’re learning more about just how many were lost and it is A LOT.

According to an update this morning, it is now estimated that some 1,900 containers were either lost or damaged, including 40 that are believed to be dangerous goods.

“Early investigations onboard the ONE Apus have determined that the impacted container bays remain unsafe for close-quarter inspections; however, it is estimated that the number of lost or damaged units could exceed 1,900, of which some 40 are believed to be DG containers,” the update said.

The ONE Apus was sailing from Yantian, China to Long Beach, California when, on Monday night (November 30), it encountered heavy weather with gail-force winds and larges swells which caused the containership to roll heavily, resulting in containers to becoming dislodged.

A notification was sent to the JRCC in Honolulu and Guam with maritime navigational warnings subsequently broadcast.

The owners and managers are now reporting that the ship will now sail towards Japan with plans to seek a port of refuge to right unstable containers, assess any damages and determine the exact number of containers impacted. “Our focus remains on getting the ship to a safe port to ensure the ongoing safety of the crew, the vessel and the cargo on board,” today’s update said.

The ONE Apus is a 14,000 TEU containership built in 2019 measuring 364-meters in length and sailing under the Japanese flag.

The vessel operates on Ocean Network Express’s Far East Pacific 2 (FP2) Service. A full investigation is expected in conjunction with the Flag State and the relevant maritime authorities.

To give you an idea of the scope of this incident, the worst cargo loss I can recall (not including shipwrecks) was in 2014 when the Svendborg Maersk lost 517 units overboard and another 250 units were damaged during adverse weather in the Bay of Biscay.

This news is a total 2957 time has been read
Tags: Damaged on ONE Apus , NYK , Ocean Network Express