Massive dual-fuel engine is a world-beater 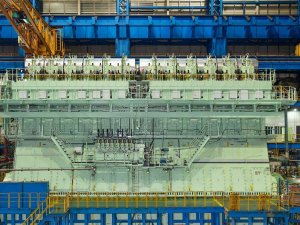 When CMA CGM needed dual-fuel propulsion for its series of nine 23,000 TEU container ships, it turned to WinGD. The result was the 12X92DF, the world’s largest Otto-cycle engine, which is a 12-cylinder version of WinGD’s 92cm bore X-DF dual fuel engine.

The key driver for development of the 12X92DF was the use of a cleaner fuel – in this case LNG – combined with a so-called lean-burning combustion cycle, allowing for better control of emissions such as NOx, SOx and particulate matter.

The engine’s development formed the focus of a paper presented at the 2019 CIMAC Congress, held in Vancouver from June 10-14. The paper, presented by WinGD’s vice president of R&D Dominik Shneiter, outlined how experience in the mid bore-range was upscaled and adapted in development of the X92DF, and outlined how challenges associated with development were overcome.

Due to the size of the engine, prototyping was impossible and conversion of existing field engines was not feasible, so a conservative approach was taken to the scaling up of components and simulation modelling. Several new features, such as a new bearing girder, a new gas pressure regulating unit (iGPR) and improved pilot pre-chamber, were introduced.

Development of a new control system was undertaken concurrently with the 12X92DF project; this enables better control of engine loads and conditions, based on idealised combustion models running in parallel directly on the control models. This offers better optimisation of subsystem integration for any electrical load or producer, the paper says.

The large vessels on which the 12X92DF engines are to be mounted are 400-m long and 61-m wide. They will be distinguished from the rest of the fleet by a special livery displaying an LNG powered logo, attesting to the major worldwide innovation that LNG propulsion represents on ships of this size.