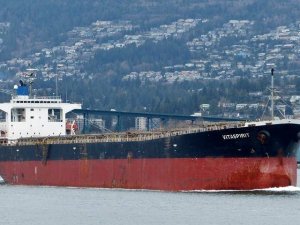 A massive tanker has crashed into an historic mansion on the shores of Istanbul's Bosphorus Strait after its steering equipment became locked, Al Jazeera reported quoting Turkish state media.

The Maltese-flagged Vitaspirit, a 225-meter (740 foot) vessel en route from Russia to Saudi Arabia has been moored in the Marmara Sea for investigation, with the owners of the mansion demanding proper prosecution against those in charge of maritime traffic.

Anadolu Agency said that there were no immediate reports of casualties, but footage from the crash showed extensive damage to the historic seaside mansion located under the Fatih Sultan Mehmet bridge, one of the three crossings between Istanbul’s Asian and European sides.

The building's roof and upper floors collapsed and videos showed the basement slumping into the water. The vessel was extracted from the mansion with the help of tugs but the Bosphorus was closed to shipping traffic in both directions, NTV television said.

The Hekimbasi Salih Efendi Mansion has stood on the shores of the Bosphorus Strait since the 18th century and is used to host weddings and concerts.

This news is a total 1327 time has been read
Tags: Massive Tanker Vitaspirit Crashes in Istanbul's Bosphorus