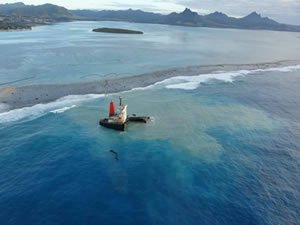 Mauritius’ Supreme Court rejected a appeal for the release on bail of the captain of the ill-fated Wakashio, siding instead with prosecutors that the captain posed a flight risk due to the heavy prison sentence and hefty fine he faces if prosecuted.

Sunil Kumar Nandeshwar, the Master on board Wakashio when it grounded on reefs off Pointe-d’Esny on July 25, 2020, will have to stay confined within the walls “Alcatraz”, the infamous Line Barracks’ Detention Center of Port-Louis, until his trial starts.

The Supreme Court rejected Nandeshwar’s appeal on Monday against a previous judgment by the Port-Louis District Court’s denying him bail.

Chief Justice Asraf Caunhye and Justice Mohanasundary Naidoo agreed with the police and the Director of Public Prosecutions (DPP) who insisted that there is just too high of risk that the Indian national accused of being responsible for grounding will take advantage of the opportunity to flee the island.

Captain Nandeshwar was arrested on August 18, 2020 after two weeks in quarantine under a provisional charge under the piracy laws.

Two months later, his lawyer applied for his release on bail, but the District Court of Port-Louis denied it. The charges against Nandeshwar have since been amended to violating an innocent passage in breach of Sections 3 & 28(1)(a) of the Mauritius’ Maritime Zones Act 2005 coupled with Articles 18(1)(b) & (2) and Articles 19(1) & 2(1) of the United Nations Convention of the law of the sea (UNCLOS).

Police also objected to the appeal based on the risk of escape, especially since the captain has blamed the first officer for the grounding.

The District Court of Port-Louis rejected his request after taking into account the fact that the accused has no family in Mauritius and that he faces at least five years in prison and a fine of 30 million Mauritian rupees (approximately $738,000 USD).

Captain Nandeshwar pointed out that a seafarers’ organization had agreed to provide him with lodging.

However, the police noted that the premises was not guarded and less than 2 km from Port-Louis’ harbor.

The fact that the Mauritian coastline is not constantly under surveillance could also tempt the defendant, who is an experienced seaman who has worked as a captain since 1995 and had navigated to and from Mauritius several times in the past.

Also, the fact that the DPP has indicated that the formal charge against Captain Nandeshwar will be filed within eight weeks prompted the Supreme Court to uphold the district court’s decision.

It should be noted that while opposing this appeal, the main investigative officer rejected the captain’s argument that it was the first officer who was responsible for the grounding as even if he was in command of the vessel.

“Even if the first officer was in control of the ship, this does not in any way relieve the captain of his responsibility to ensure the safety and security of the ship, especially in terms of preventing any accident,” the officer said.

The 300-meter long Wakashio left Lianyungang, Jiangsu province, in northeast China, bound for Brazil, on July 14 and ended up 900 meters from the shore of Mauritius on the reefs of Pointe-d’Esny, a small seaside resort in the South-east part of the island, on July 25, 2020.

About two weeks later, fuel oil started spilling from the vessel through a breach in the hull caused by movement from the swell.

An estimated 1,000 tonnes of fuel oil was spilled into the waters and lagoon before the source stopped. Captain Nandeshwar has maintained that it was the first officer who was to blame before the Court of Investigation which is charged with investigating the accident on behalf of the Mauritian government.

The captain has, however, admitted that he personally changed the course of the ship to sail along the island’s coastline in order to get cellphone coverage so that the crew could contact their loved ones through WhatsApp.

It turns out that his men have been at sea since January 2020 and have not been relieved due to the Covid-19 pandemic that has spread around the world.

This news is a total 686 time has been read
Tags: wakashio , captain