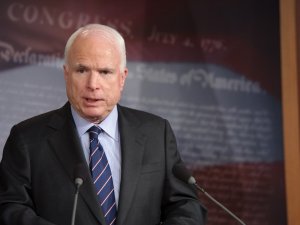 U.S. Senator John McCain has filed an amendment to repeal the Merchant Marine Act of 1920, also known as The Jones Act.

”I have long advocated for a full repeal of The Jones Act, an antiquated law that has for too long hindered free trade, made U.S. industry less competitive and raised prices for American consumers,” said Senator McCain.
McCain cited the Congressional Research Service which found that the price of moving crude from the Gulf Coast to the Northeast United States on a Jones Tanker is three times higher than if a foreign-flagged tanker is used.

Senator McCain’s latest stab at The Jones Act was strongly opposed  by the American Maritime Partnership (AMP), saying that McCain’s amendment would eliminate the U.S. shipbuilding and outsource jobs.

”The McCain amendment would gut the nation’s shipbuilding capacity, outsource our U.S. Naval shipbuilding to foreign builders, and cost hundreds of thousands of family-wage jobs across this country,” said AMP Chairman Tom Allegretti. ‘‘The shipbuilding requirement, which Senator McCain seeks to eliminate, is in place to ensure that the United States maintains the industrial capacity to build its own ships, so as to protect and defend the American homeland.”