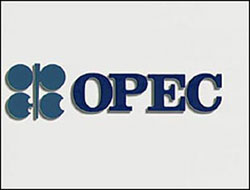 The Organization of Petroleum Exporting Countries will hold an extraordinary meeting in Vienna on Nov. 18 after the global financial crisis sent crude prices below $90 a barrel.

OPEC to Hold Meeting on Nov. 18 to Tackle Price Drop

The Organization of Petroleum Exporting Countries will hold an extraordinary meeting in Vienna on Nov. 18 after the global financial crisis sent crude prices below $90 a barrel.

''The Organization is concerned about the deteriorating economic conditions with contagion risks,'' OPEC's Vienna-based secretariat today said in. The gathering will ''discuss the global financial crisis, the world economic situation and the impacts on the oil market.''

Qatar's Oil Minister Abdullah bin Hamad al-Attiyah and Shokri Ghanem, chairman of Libya's National Oil Corp., had earlier told that they backed such a summit next month. OPEC had been scheduled to next meet on Dec. 17 in Algeria.

Oil prices have plummeted 40 percent from their July record of $147.27 a barrel as the worsening credit crunch threatens to restrain economic growth and curtail energy demand.

The ''reasons for the fall of oil prices will be considered in this meeting,'' Iranian Oil Minister Gholamhossein Nozari said earlier today, according to the Islamic Republic News Agency.

OPEC resolved at its most recent meeting in Vienna last month to stick more closely to official quotas, implying a cut of about 500,000 barrels a day.

The official production quota for 11 of OPEC's members is 28.8 million barrels a day. Collectively, those members exceeded that target by 390,000 barrels a day in September, according to Bloomberg estimates. Those 11 nations do not include Iraq, which has no quota, and Indonesia, which is set to leave OPEC next year.

Saudi Arabia, the organization's biggest producer, has yet to comment on the summit.

''The Saudis don't want to meet at all,'' said Leo Drollas, deputy executive director at the Center for Global Energy Studies in London.

''They weren't happy to meet in Vienna and didn't want to announce any output restrictions. But they have the others around their necks and have to go through the motions.''

Saudi Arabia would need a minimum oil price of $65 a barrel this year to meet its infrastructure spending and debt obligations if it pumped at a rate of 9 million barrels a day, Drollas said. The kingdom produced about 450,000 barrels a day more than this last month, according to Bloomberg data.

''There's no way the Saudis need prices of $80 a barrel'' to meet their budget requirements, Drollas added. While the kingdom may overtly agree to a cut if pressed by other members, ''they won't implement it.''

OPEC may need to 'intervene' to ''balance the fundamentals of the market,'' Nigerian Energy Minister Odein Ajumogobia also said yesterday.

It its statement today, OPEC reiterated its 'determination to ensure that oil market fundamentals are kept in balance and market stability is maintained.'

''The price is getting near to $80 and they're getting nervous,'' Johannes Benigni, chief executive officer of Vienna- based consulting firm JBC Energy, said yesterday.

''OPEC is going to send the signal that they'll do what it takes to defend $80. This range they want between $80 and $100 has been well-known for some time.''

Venezuelan President Hugo Chavez said yesterday that he was aware of calls for the November meeting, adding that the country's oil minister, Rafael Ramirez, would use such an occasion to push for the creation of an oil-producers bank.

This news is a total 1685 time has been read