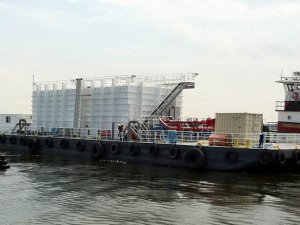 The Maritime Environment Resource Center (MERC) was established in 2008 by the University of Maryland Center for Environmental Science (UMCES) to facilitate the development and adoption of Green Ship and Green Port innovations with a primary goal of expanding on over twenty years of research addressing the issues of ballast water invasive species. Invasive species introduction through the release of ship’s ballast water have enormous ecological and economic impacts on coastal waters around the world.

MERC has served as an independent, third-party test facility for evaluating the performance of ballast water management systems (BWMSs), which have been certified by several countries around the world (under the International Maritime Organization [IMO] Ballast Water Convention’s Guidelines G8 for Approval of BWMSs) and is part of the first U.S. Coast Guard (USCG) designated Independent Laboratory for testing and certifying BWMSs. Due to flaws in regulations designed to minimize the risk of ballast water introductions of invasive species, MERC will no longer provide BWMS certification testing services.

After several years of MERC efforts to ensure scientifically-sound, predictive, consistent, and transparent BWMS certification testing, it has become clear that the lack of an appropriate standardized approach and sufficient oversight in the implementation of ballast water regulations is undermining the fundamental goal of national and international policies to prevent the introduction of environmentally and economically destructive invasive species.

“MERC has a deep understanding of the complexities and challenges associated with testing ballast water management systems against specific discharge standards. While perfection is unrealistic, it is possible to be rigorous, consistent, and transparent when testing BWMSs, which is necessary for the regulations to succeed,” said Dr. Mario Tamburri, Director of MERC and UMCES Research Professor.

Shortcomings in both the IMO G8 Guidelines and the USCG Independent Laboratory certification testing process have resulted in significant uncertainties about the quality and value of test results. For example, both approaches allow test facilities to ignore live larvae of zebra mussels and other mollusks, eggs of various species, and large algal cells simply because they often don’t or naturally cannot move on their own, and under current regulations can be presumed dead. Other basic scientific methods can clearly demonstrate that these same non-moving organisms are living and viable. Thus, the threat of introductions of new species from ballast water after treatment with a certified BWMS may not be significantly reduced.

“UMCES’ scientific integrity and reputation for providing advice for science-based decision making is of the utmost importance,” said UMCES Chesapeake Biological Laboratory Director Dr. Thomas Miller. “Therefore, under the current regulations, which do not significantly reduce the threat of some invasive species, MERC can no longer conduct BWMS certification testing.”

MERC will complete the testing for which it is currently contracted, but will suspend all future testing of BWMSs. MERC remains committed to contributing constructively in future efforts to revise the process for certification of BWMSs at the national and international level with the objective of improving upon current BWMS test methods, approaches, and consistency to achieve the fundamental goal of minimizing the risk of invasive species.

This news is a total 885 time has been read
Tags: MERC to Cease BWMS Type Approval Testing