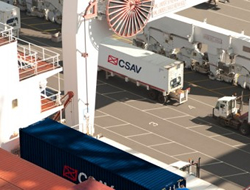 The shares rose as much as 27 percent and closed up 13 percent to 28.53 pesos in Santiago, the biggest advance since March 1, 2012. Company executives met last month in Miami to discuss the tie-up, the newspaper reported on its website, citing a Hapag-Lloyd official that it didn’t name. Die Welt didn’t give proposed terms of the deal.

CSAV’s 86 percent loss in the past three years is the worst performance among peers tracked by Bloomberg as the industry struggles to recover from a slump in shipping rates. In response to a glut of new vessels, operators such as AP Moller-Maersk A/S are forming alliances with competitors to lower costs and eliminate excess capacity on trade routes.

The billionaire Luksic family controls Valparaiso, Chile- based CSAV with a 46 percent stake. The Luksic’s holding company Quinenco SA has put more than $1 billion into CSAV in the past two years after the company lost a record $1.25 billion in 2011.

An external public relations representative for CSAV, who isn’t an authorized spokesperson, didn’t have a response to the article when contacted by telephone. The Santiago stock exchange asked the company to disclose any events that would explain the share move, according to a note on its website.

Hapag-Lloyd, based in Hamburg, is Europe’s fourth-largest container-shipping line with a 4.2 percent share of the world’s fleet, according to Alphaliner. The company is owned by a group of shareholders including German tourism company TUI AG and HSH Nordbank. Hapag-Lloyd spokeswoman Eva Gjersvik didn’t immediately respond to an e-mail seeking comment.

This news is a total 1758 time has been read