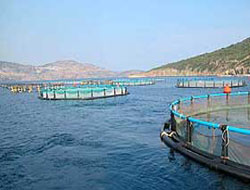 A recent project by the Agriculture Ministry to allow the establishment of fish farms on Mersin's shores has caused uneasiness in the region.

A recent project by the Agriculture Ministry to allow the establishment of fish farms on Mersin's shores has caused uneasiness in the region.

Local residents of the Mediterranean city of Mersin have started a petition campaign against the project, citing the pollution caused by the fish farms in the Bodrum region as the reason for their opposition.

The plan has created distress among locals in Mersin. Nongovernmental organizations consider the plan as ?suicide? for the city that has become Turkey's window opening to the world since the operation of Mersin Port in 1962.

?Mersin's dreams of becoming an important spot for tourism cannot be sacrificed to plans for fish farms,? Ali Do?an, chairman of the Mersin Industrialists and Businessmen Association (MES?AD), told the Do?an news agency. ?The future of this city lies in tourism. Therefore we will oppose any plans that can ruin it. Mersin coasts are no one's junk yard,? he said.

The city, which has a coastline of 320 kilometers, has earned a good reputation with Silifke Ovac?k, Karg?c?k, Ayd?nc?k Ortaburun, Anamur Melleç tourism resorts as well as its untouched coves like Bo?sak, Narl?kuyu and Karbo?az?. Under the leadership of MES?AD, a follow-up committee has been established and a petition campaign against the project has been launched.

No harm to tourism

Despite the reaction to the project, state officials assure the public that neither tourism nor any other sector will be negatively affected. Environment and Forestry Mersin Provincial Director Hasan Saday told the Anatolia news agency that the studies to determine potential areas for fish farms in Mersin have been completed and the reports have been sent to the ministry and the prime minister's office.

?We have learned from the mistakes made in the past,? he said. ?We are aware of the condition in Mu?la and its environment. That is why we have determined very strict criteria for the farms to be established here.?

Saday said the farms will be at least one kilometer off the shores, the sea should have a depth of at least 30 meters, the water current must be more than 0.1 meters/second and the farm should not be located in front of a residential area.

?Some of the areas determined according to these principals were also tourism areas, so we took them off the list. Our basic principle is that fish farms should not negatively affect any other sector, especially tourism.?

Saday said the report defines three potential areas, where the number of fish farms will not be allowed to exceed 150. ?149 firms have already applied to the Undersecretariat for Maritime Affairs Mersin Directorate for necessary permissions and 11 of them have applied to our directorate to get environmental impact assessment (EIA) reports.?

There are already four fish farms in the Mersin region three of which are located outside the three areas, and they have been officially warned about the new situation, said Saday.

This news is a total 586 time has been read