Mersin Port inches back to normal 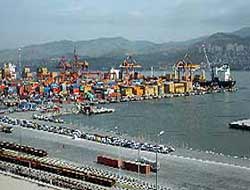 After a five-day backlog in Mersin Port, the number of vessels docking at the harbor returned back to near normal in the past two plus days.

Mersin Port inches back to normal

After a five-day backlog in Mersin Port, the number of vessels docking at the harbor returned back to near normal in the past two plus days.

Mersin Port began to operate on May 11 but performed under-capacity for a number of days while it went from the hands of the old management to the new.

“We would like to underline that the backlog is a natural and temporary result of this mandatory handover process,” said Managing Director of MIP (Mersin International Port) Ong Kim Pong yesterday.

“The coordination team consulted with the City Government, Customs and Civil Organizations and is working continuously to eliminate the backlog,” he added.

On Monday Turkish Daily news had published a report related to the stopped activity at the Mersin Harbor, which has recently been turned over to the PSA-Akfen Joint Venture Group.

Industrialists have been complaining about the new management of the port since the PSA-Akfen takeover on May 16. Phones are not even being answered at the port, they said. “We are unable to export and import,” said Nejat Koçer, board chairman of Gaziantep chamber of industry.

The Mersin port, recently turned over to PSA-Akfen Joint Venture Group for a hefty $755 million, is facing a lot of challenges due to the change in management, reported the Turkish Daily News on Monday.

"Business was stalled due to the prolonged turnover procedure. However, after the completion of the turnover businesspeople have been “facing even more hardship,” said Koçer.

PSA-Akfen Joint Venture Group had stopped all activity at the port and the distress was “increasing with each passing day,” said Koçer.

Responding to criticisms of the prolonged turnover, Pong explained that management was taking the time to “manage the process properly and educate employees on procedures.”

The Privatization Board (Ö?B) had announced a tender for the privatization of State railways owned Mersin port on August 14, 2005. Mersin International Port Industry (MIP), a PSA-Akfen consortium, won the right to manage Mersin port for the next 36 years. The company transferred $755 million to the Privatization Board's account. However, the turnover could not be finalized for a long time due to pending lawsuits. When those court cases were finalized, issues preventing the completion of the turnover were resolved. In a ceremony held on May 16, with the participation of Finance Minister Kemal Unak?tan, PSA-Akfen consortium took over the Port's management.

This news is a total 1555 time has been read