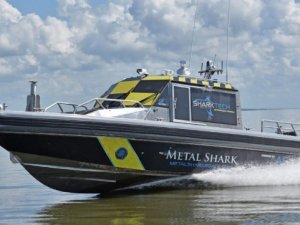 Metal Shark has entered the field of vessel autonomy through a partnership with ASV Global, the maker of C-Worker autonomous workboats and the ASView autonomous navigation and remote control suite.

Louisiana-based boatbuilder Metal Shark has entered the field of vessel autonomy through a partnership with ASV Global, the maker of C-Worker autonomous workboats and the ASView autonomous navigation and remote control suite.

Metal Shark says that it can now install ASV's autonomous technology on its entire portfolio of vessel designs, which range from 16 feet to over 300 feet. It hopes to market this capability for a full range of military, law enforcement, rescue and commercial applications.

Metal Shark CEO Chris Allard says that the "Sharktech" technology package allows the operator to reduce or remove manning when required, and is especially well-suited to operations in dangerous environments and long-endurance missions. "Sharktech’s benefits for safety, crew reduction, endurance, and CONOPS flexibility are unprecedented in our industry, and we are only scratching the surface of its potential applications," Allard said.

Sharktech relies on ASV's ASView onboard navigation system, which uses radar, cameras and AIS to identify obstacles and maneuver through traffic. The system's remote-control component allows the operator to run a wide range of equipment from afar, including fire pumps, fifi monitors, survey equipment, metocean instrumentation, FLIR cameras and more. If the satcom or ship-to-ship radio link between the operator and the boat is lost, the onboard system defaults to a pre-programmed safe behavior, like station-keeping.

“The industry has watched and waited as autonomous technology has matured from its fledgling stages, and today we’re offering ASV Global’s fully proven autonomous capability on our entire model lineup,” said Metal Shark CEO Chris Allard. “Check the box and get the option.”

Those interested in owning an autonomous boat need wait no longer: Allard says that lead times for a 38-foot model are as little as 60 days, depending upon the options selected.

This news is a total 749 time has been read
Tags: Metal Shark Enters Autonomous Boat Market