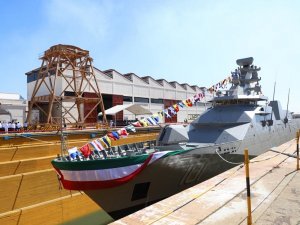 The Mexican Navy has recently completed Sea Acceptance Tests (SAT) for its multi-purpose frigate DAMEN SIGMA 10514, ARM Reformer (POLA 101). The tests were conducted from November 18 to December 18, 2019, off the coast of the southern Pacific states of Oaxaca and Guerrero, the Mexican Navy announced.

The Mexican Navy recently finished the Sea Acceptance Tests (SAT) for its DAMEN SIGMA 10514 multipurpose frigate, ARM Reformador. The trials were conducted from 18 November 18 to 9 December 2019, off the coast of Oaxaca and Guerrero states, in Mexico’s southern Pacific region, the navy said.

The first Damen SIGMA 10514 frigate for the Mexican Navy was launched on November 23, 2018, at The Astillero de Marina No. 20 Mexican Naval Shipyard (ASTIMAR-20) in Salina Cruz (Oaxaca). In the Mexican Navy, this ship is officially referred to as the "long-range ocean patrol ship" (Patrulla Oceánica de Largo Alcance - POLA). The vessel is called POLA 101 Reformador ("Reformer").

The SIGMA 10514 is part of the Mexican Navy’s Long Range Patrol Vessel Project, locally known as POLA (Patrulla Oceánica de Largo Alcance), which intends to provide the force with eight frigates before the end of the next decade. Construction began in 2016, with four out of six ship modules, or sections, being built locally at the navy’s ASTIMAR 20 shipyard in Salina Cruz, Oaxaca, whereas two modules – bridge and propulsion modules – were built in the Netherlands.

Final assembly and system integrations took place in Mexico, with the assistance of DAMEN, the long-time partner of the Mexican Navy, which also provided technical support for the construction of 10 Stan Patrol coastal patrol vessels, known locally as the class. Tenochtitlan.

The frigate of the SIGMA 10514 project being built for the Mexican Navy is similar in type to the two frigates of the same type built with the assistance of Damen in Indonesia (PKR). The Mexican ship has a standard displacement of 2,575 tons, a length of 107.14 meters, a width of 14.08 meters and a draft of 3.75 meters. The two-shaft diesel-electric power plant (CODOE) includes two 9240 kW diesel engines, six 735 kW diesel generators and two electric motors. It has a maximum speed of 28 knots, economic 18 knots, low noise 14 knots. Its range is 5,000 nautical miles at an economical speed, with an endurance of 20 days. Full fuel capacity is 300 tons. The crew consists of 122 sailors.

The introduction of the Reforming ARM represents not only a technological leap but also a doctrinal evolution in the Mexican Navy, as it is willing to evolve from a purely constitutional force to a much more balanced force.