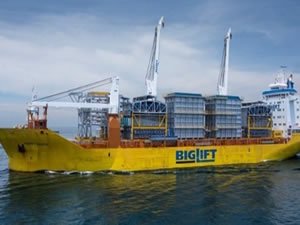 Mexican authorities are detaining a heavy lift vessel after the discovery of cocaine hidden aboard one of the sailboats the vessel was transporting and offloaded in Mexico. An investigation is ongoing into the circumstances.

During a search of the sailboat, the Mexican authorities discovered 200 kilos of cocaine hidden aboard the boat. It has an estimated street value of nearly $3 million.

The Happy Dover had arrived in Ensenada after a call in Costa Rica. The ship had made a transit of the Panama Canal with previous stops in the Bahamas.

The next port of call is scheduled to be Long Beach, California and the ship’s operators reported that it was scheduled to continue on a Pacific crossing bound for Tahiti and Fiji. In addition to the catamaran which had been offloaded, the vessel is carrying several other large pleasure crafts.

The Mexican Navy and the Attorney General’s office were involved in the search of the catamaran named Quest.

They were reported to also be interviewing the 18-member crew aboard the lift vessel. Speaking to the Dutch media, a spokesperson for the ship’s operator said they were uncertain how long the lift ship would be detained in Mexico in part because today was a holiday in Mexico.

They do not believe that the ship or its crew was involved in the smuggling, although they did not report where the catamaran had been loaded. Recently, Mexico’s president had said he was going to move the military in to run the country’s major ports to crackdown on the flow of illegal narcotics.

President Andres Manuel Lopez Obrador said responsibility for the port operations would be transferred from the civilian Transportation Ministry to the military.

Army personnel who he has often said are less corrupt than the bureaucrats would oversee all aspects of the port operations.

The president cites the army’s success in fighting corruption and the cartels.

The investigation hopes to discover the details of the current plan and where the catamaran was headed.