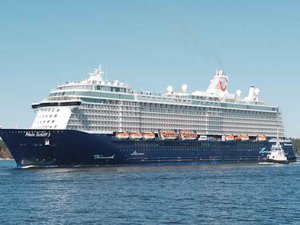 The new vessels, expected to be delivered in 2018 and 2019, and will replace TUI Cruises’ Mein Schiff 1 and Mein Schiff 2, which will be retained by TUI Group under Thomson Cruises.

TUI Cruises CEO Wybcke Meier said: “TUI Cruises has firmly established itself in the German-speaking market, with occupancy of our fleet totalling more than 100% last year.

“This year, demand has also been excellent so far, with bookings currently being taken for five ships. A further expansion provides a great opportunity to strengthen our position with one of the most modern fleets in the German market.”

“A further expansion provides a great opportunity to strengthen our position with one of the most modern fleets in the German market.”.

“The addition of the fleet by two additional new-buildings strengthens the leadership position of the TUI in the premium cruise segment and reinforces the successful partnership between our two companies.”

Meyer Turk delivered Mein Schiff 4 on 8 May 2015, and now it is building Mein Schff 5 and Mein Schiff 6, which will be delivered in 2016 and 2017 respectively. The new order will boost the shipyard’s order book until 2020.