Mideast 'to grow faster than other markets' 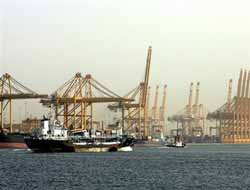 The Middle East accounted for 10 per cent of the containers transported by the world's biggest shipping firm Maersk Line last year.

Mideast 'to grow faster than other markets'

The Middle East accounted for 10 per cent of the containers transported by the world's biggest shipping firm Maersk Line last year.

Maersk expects its business in the region to grow faster than in other markets, the company's Middle East area chief executive officer Marc Gijsbrechts said.

There will be a better balance in terms of imports and exports in the Middle East, which has primarily been an import-driven surplus market, the Maersk official said in a statement at an annual company event in Dubai.

Robert Uggla, managing director of Maersk UAE, said he was concerned about low freight rates, while bunkering, logistics and terminal costs were rising.

"Rates have to go up on certain trades, such as East Asia-Middle East, or the industry will have to pull out capacity, as has been the case elsewhere," he added.

Uggla said 2007 started well for the company as most vessels departing Jebel Ali were full due to a stronger export market.

This news is a total 546 time has been read