Military boat to divers in Bodrum 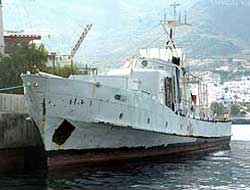 Used for years for military purposes by the Turkish Naval Forces, the 37-meter boat will be the first military sunken ship to serve diving tourism.

Used for years for military purposes by the Turkish Naval Forces, the 37-meter boat will be the first military sunken ship to serve diving tourism.

A military boat belonging to the Turkish Naval Forces will serve to boost diving tourism in Bodrum. The boat, currently anchored in Bodrum's Turgutreis district, will be sunk and open for dives in mid-May as part of a project by the Bodrum Underwater Association (BOSAD).

Used for years for military purposes by the Turkish Naval Forces, the 37-meter boat will be the first military sunken ship to serve diving tourism and will also be open to visitors via a mini submarine. Diving tours will be conducted to the boat under the auspices of instructors at Bodrum-based diving centers. Marine and underwater archaeology department students will also hold workshops at the boat, reported the Do?an News Agency.

Tourists will flock to dive:

Erman Akarsu of the association said they prepared the project to establish a sustainable tourism in Bodrum where diving centers and clubs are accumulated. “The underwater sports tourism which recently developed rapidly in our coasts made the diving sport an easy, enjoyable, relaxing and educational hobby. The project is important in that it aims to develop the diving sport and make it popular among the public, as well as help develop marine sciences,” he said. "It is the first time in the Turkish Republic history that a military boat will be sunk to serve for diving tourism. I believe that the boat, which will sink to the 20-25 meter depth, will contribute to the promotion of tourism both in Turkey and Bodrum. When the project is realized, we expect that over 300,000 domestic and international tourists will dive in the region every year.” An airplane and helicopter to be donated by the Turkish Air Force will also be used for diving tourism in the coming years as part of the project, supported by the Bodrum Municipality, Bodrum Chamber of Commerce, BOSAD and Marine Commerce Chamber.

Diving should be allowed in the Dardanelles:

Meanwhile, underwater archaeologist and diving center owner A?k?n Cambazo?lu said except for scientific diving, shipwrecks were forbidden for diving purposes around 20 years ago by the Culture and Tourism Ministry. “Our underwater heritages could be protected on a large scale via this implementation. The underwater areas close to sport-based diving were narrowed in 2001, which contributed to the development of diving tourism as a result of works by the ministry. Our underwater archaeologists, who are sensitive to the environment, are developing new projects and our coasts are waiting divers who wonder about the mysterious history under water.

I believe ten thousands of tourists will flock to Bodrum solely for doing this sport,” he said, expressing his belief that the project initiated by BOSAD would contribute to the diving tourism in Turkey. “There are many shipwrecks in Yass?ada which is close to Bodrum's Turgutreis district, as well as by the Mediterranean coastal resort of Kekova and the Dardanelles, which is home to numerous wartime shipwrecks sunk during World War I. If the controlled tourism diving is allowed in these areas, Turkey could be the prime country in the world in terms of diving tourism," he noted.The Aegean and the Mediterranean have long been important diving destinations for both Turkish and international divers, many of whom are particularly attracted to Gallipoli and the Dardanelles in Çanakkale to explore the large number of British, French and Italian ships sunk around Gallipoli and the Dardanelles during the World War I.

This news is a total 1765 time has been read