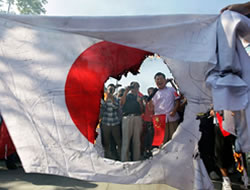 Hawkish Chinese commentators have urged Beijing to prepare for military conflict with Japan as tensions mount over disputed islands in the East China Sea, but most experts say chances the Asian rivals will decide to go to war are slim.

A bigger risk is the possibility that an unintended maritime clash results in deaths and boosts pressure for retaliation, but even then Tokyo and Beijing are expected to seek to manage the row before it becomes a full-blown military confrontation.

"That's the real risk - a maritime incident leading to a loss of life. If a Japanese or Chinese were killed, there would be a huge outpouring of nationalist sentiment," said Linda Jakobson, director of the East Asia Program at the Lowy Institute for International Policy in Sydney.

"But I still cannot seriously imagine it would lead to an attack on the other country. I do think rational minds would prevail," she said, adding economic retaliation was more likely.

A feud over the lonely islets in the East China Sea flared this month after Japan's government bought three of the islands from a private owner, triggering violent protests in China and threatening business between Asia's two biggest economies.

Adding to the tensions, China sent more than 10 government patrol vessels to waters near the islands, known as the Diaoyu in China and the Senkaku in Japan, while Japan beefed up its Coast Guard patrols. Chinese media said 1,000 fishing boats have set sail for the area, although none has been sighted close by.

Despite the diplomatic standoff and rising nationalist sentiment in China especially, experts agree neither Beijing nor Tokyo would intentionally escalate to a military confrontation what is already the worst crisis in bilateral ties in decades.

"The chances of a military conflict are very, very slim because neither side wants to go down that path," said former People's Liberation Army officer, Xu Guangyu, now a senior consultant at a government-run think tank in Beijing.

Pressure from the United States, which repeated last week that the disputed isles were covered by a 1960 treaty obliging Washington to come to Japan's aid if it were attacked, is also working to restrain both sides, security experts said.

"I very seriously do not think any of the involved parties - Japan, China and including the United States because of its defence treaty (with Japan) - want to see a military conflict over this dispute," said the Lowy Institute's Jakobson.

"They don't want to risk it, they don't seek it and they do not intend to let it happen."

Still, the possibility of a clash at sea remains.

While the presence of the Chinese surveillance ships - none of which is a naval vessel - and Japan Coast Guard ships in the area might appear to set the stage for trouble, military experts said each side would try to steer clear of the other.

"The bad news is that China sent ships to the area. The good news is that they are official ships controlled by the government," said Narushige Michishita at the National Graduate Institute for Policy Studies in Tokyo.

"This is good news because they are not likely to engage in aggressive action because that would really exacerbate the situation and turn it into a major crisis," said Michishita.

The Chinese ships, he said, had another mission besides asserting China's claims to the islands and nearby waters.

"My guess is that some (Chinese) official patrol boats are there to watch out for fishing boats ... to stop them from making problems," Michishita said.

Military specialists say the Chinese patrol vessels are well disciplined as are the Japan Coast Guard ships, while the two sides have grown accustomed to communicating.

"Both sides are ready, but both sides are very well under control," said a former senior Japanese military official.

What worries observers most is the risk that a boat carrying Chinese fishermen slips through or activists try to land, sparking clashes with Japan's Coast Guard that result in deaths - news of which would spread like wildfire on the Internet.

In 1996, a Hong Kong activist drowned in the nearby waters.

Diplomatic and economic relations chilled sharply in 2010 after Japan arrested a Chinese trawler captain whose boat collided with a Japan Coast Guard vessel. This time, tensions are already high and China is contending with a tricky once-in-a-decade leadership change while Japan's ruling party faces a probable drubbing in an election expected in months.

"Two rational governments of major countries would not intentionally decide to enter into a major war with each other over a few uninhabited rocks," said Denny Roy, an Asia security expert at the East-West Centre in Hawaii.

"But unfortunately, you can arrive at war in ways other than that - through unintended escalation, in which both countries start out at a much lower level, but each of them think that they must respond to perceived provocation by the other side, both very strongly pushed into it by domestic pressure. That seems to be where we are now and it is difficult to see how countries can get out of that negative spiral."

Others, however, were more confident that an unplanned clash could be kept from escalating into military conflict.

"That's not really a major possibility, because there are still broad channels of communication between the two sides, and they would help prevent that happening. Both sides could still talk to each other," said former senior PLA officer Xu.

"Even before anything happened, you would also have the U.N Secretary General and others stepping in to ensure that the situation does not get out of control."

This news is a total 3305 time has been read