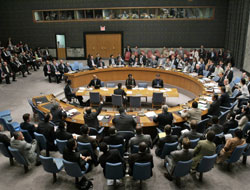 The US-drafted resolution extends for one year the right of countries.

The United Nations Security Council has renewed its authorisation for the use of military force against pirates operating off Somalia, enabling the European Union to begin an air and naval operation next week. The US-drafted resolution, which was adopted unanimously, extends for one year the right of countries with permission from Somalia's transitional government to pursue and attack pirates in Somali waters. "The international community is sending a very strong signal of its determination to deal with piracy," said Jean-Maurice Ripert, the French ambassador to the UN.

The EU is set to send warships to patrol Somalia's Gulf of Aden and Indian Ocean waters, where a rise in piracy is threatening to stifle one of the world's busiest maritime trade routes.

The issue of who has jurisdiction over captured pirates remains unresolved

"We think it will act both as a deterrent and also [provide] some immediate capacity to follow on and pursue pirates, if we can catch them," Ripert said.
However, the issue of who has jurisdiction over captured pirates and where they can be prosecuted remains unresolved.

Meanwhile, Somalia's insurgent Islamist leader called on pirates Tuesday to immediately release a giant Saudi oil tanker and other foreign vessels, while a NATO warship foiled a new attack in the Gulf of Aden.
"We are calling for the immediate release of all international vessels under the command of Somali pirates, who are undermining international peace and trade," Sheikh Hassan Dahir Aweys told.

The pirates have demanded a 25-million-dollar (20-million-euro) ransom for the 330-metre Sirius Star which was carrying two million barrels of crude oil and 25 crew when it was seized on November 15.
The tanker is one of more than a dozen foreign merchant vessels and their crew being held by gunmen on the lawless Somali coast.

In a further illustration of the pirates' growing audacity on Tuesday, a NATO warship prevented a swarm of more than a dozen pirate boats from hijacking five merchant shipping vessels in the Gulf of Aden, the alliance said.

Alerted by a distress call, the Italian navy destroyer put itself between the ships and a group of pirate "fast boats," with all vessels using water hoses to repel the pirates.

The Italian warship also used its helicopter against the pirates, dispersing their attack, a NATO official said.
"This is probably the biggest multiple, coordinated attack we've seen," the official said, adding that more than 12 pirate boats were involved, perhaps as many as 20.

Also on Tuesday, a Greek bulk ship released by pirates last week reached the Kenyan port of Mombasa with its 26 Filipino crew.

The Islamist leader's appeal came a day after a Miami-based company said one of its cruise liners with 600 people aboard narrowly escaped being boarded by pirates as it crossed the Gulf of Aden at the weekend.

This news is a total 555 time has been read