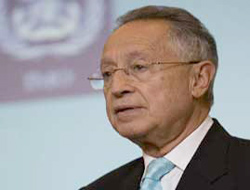 IMO secretary general Efthimios Mitropoulos has attacked people who criticise shipping"s environmental record, especially with regards to its contribution to climate change. ?The criticism, by some politicians, civil servants and certain media representatives, is often ill-founded and inaccurate and seems to confuse work on air pollutants with that aiming at reducing greenhouse gas emissions,? he said, speaking at the opening of the 57th session of the IMO"s Marine Environment Protection Committee in London.

?The environment is not the privilege of a few; it is the responsibility of all. Nobody can claim monopoly over the environment and international shipping should not be allowed to become a scapegoat for those who find it a ?soft target?, singling it out from other modes of transport, when data show it as having greener credentials than them, representing, according to Sir Nicholas Stern"s study of 2006, 1/10 of the transport sector as a whole or, in other words, 1.4% of the total of CO2 emissions worldwide ? although Professor David Lee has recently estimated that shipping constitutes a higher percentage of such emissions.?

He went on to pledge continued drives towards improving shipping"s environmental performance, describing it as the industry"s duty as responsible citizens of this planet.

?In his book ?The Moral Consequences of Economic Growth?, Benjamin M. Friedman recognizes that economic development often brings undesirable side effects, like damage to the environment. And asks whether we have the right to burden future generations, or even other species, for our own advantage. I think we do not. That is why I expect the response of this Organization to challenges that threaten the environment, to be a resounding ?yes? to all measures needed to protect and preserve it ? as long as they are realistic, pragmatic, workable and cost-effective and as long as efforts to improve one aspect of a ship"s performance do not lead to deterioration in other areas of transport and energy.?

?That is why we need, within the timetables already agreed and those to be agreed upon, to debate the issues before us thoroughly so that, in the end, we make balanced decisions ? an approach that only this Organization, with its global membership and global mandate, can make on a global issue of global dimensions.?

?Undeniably, our credentials are good ? let us use this session of the Committee to make them better. History will acknowledge it and future generations will recognize our efforts to ensure that they, too, are able to enjoy the benefits and pleasures the seas so generously give us in abundance. The omens are good ? and good is the news that, in all my meetings with representatives of Governments, shipowner organizations, oil companies, chambers of shipping and others, never have I sensed a feeling of reluctance or hesitation from any of them to play their part in any effort undertaken by this Organization to protect and preserve the environment, as well as the health of the seafarers and people living in port cities or along the coast. Neither have any of them ever hinted that commercial considerations should be given precedence over environmental ones ? a position they have also always maintained when safety issues are on the table for consideration.?

?The statements issued, earlier this year, by the Heads of the Round Table industry organizations and those of OCIMF, IPIECA and the United Kingdom Chamber of Shipping express quite clearly the position of the entities they represent: while unambiguously supporting the work of IMO and urging its Members to continue their efforts to find, within the current year, appropriate and pragmatic solutions to benefit the environment on a global basis, they also advocate that shipping can only be effectively legislated for at a global level. This is what IMO has been doing over the half century of its existence; this is what we should do again this time ? this is what would render redundant anyone"s thought or desire to adhere to regional or unilateral measures.?