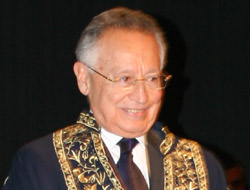 SPEAKING in Salvador, Brazil, at the third "Parallel Event" to celebrate World Maritime Day formally and officially outside of IMO's London base, the IMO Secretary-General Efthimios Mitropoulos...

SPEAKING in Salvador, Brazil, at the third "Parallel Event" to celebrate World Maritime Day formally and officially outside of IMO's London base, the IMO Secretary-General Efthimios Mitropoulos has made a call for a new ethical mindset if the world is to tackle effectively the current environmental challenges with which it is now faced.

Mr Mitropoulos said: "Historically, the march to full economic development has been partly at the expense of the earth's resources, to the extent that the fine natural equilibrium on which we all depend is now under threat. It will fall to countries like Brazil, and the other emerging economic powerhouses, to take a lead and find ways of ensuring that future growth and expansion takes full account of what we now know about the fragile state of the planet."

He said that mankind's unprecedented understanding of the effects of human activity puts us in a privileged position today, but also demands that we develop innovative solutions. He called for a "new ethical mindset" and said that the planet's future depends on whether the long-overdue lessons that we are now learning have come in time to make a real difference.

The event, held on Friday, 14 September, took the form of a technical forum in which leading figures from the maritime community in Brazil took the opportunity, in the presence of representatives from several IMO member countries, to outline, from their perspective, the steps that had been taken in support of the theme for this year's World Maritime Day, "IMO's response to current environmental challenges." Speakers from Argentina and the United States of America were also present at what was an international event of significance.

Speaking at the opening of the forum, Mr Mitropoulos drew attention to the considerable progress that had been made by shipping over many years to reduce its negative impact on the environment in a host of different arenas. In particular, he mentioned IMO's work to regulate and reduce oil pollution; the use of harmful anti-fouling paint on ships' hulls; preparedness, response and co-operation in tackling pollution from oil and from hazardous and noxious substances; and the right of States to intervene on the high seas to prevent, mitigate or eliminate danger to their coastlines from pollution following a maritime casualty. IMO has also put in place a series of measures designed to ensure that the victims of pollution incidents can be financially compensated.

This news is a total 1324 time has been read