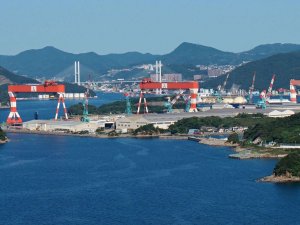 Mitsubishi Heavy Industries (MHI) will establish two new wholly-owned companies effective from January 1, 2018, as part of a reorganization of its shipbuilding business.

Mitsubishi Shipbuilding will primarily undertake construction of ships that require intensive outfitting, and Mitsubishi Heavy Industries Marine Structure will mainly engage in the manufacture of large ships and marine structures.

Mitsubishi Shipbuilding will consolidate the current capabilities of MHI's various shipbuilding bases (Shimonoseki, Nagasaki, etc.) and function as a business company exclusively dedicated to shipbuilding. Its corporate name was chosen to reflect MHI's long history and traditions in shipbuilding. Applying MHI's prowess in engineering, the new company will grow business in ships that require intensive outfitting such as ferries and vessels used by governmental agencies.

A third new company, Mitsubishi Heavy Industries Engineering, will be based in Yokohama and will handle engineering operations related to chemical plants and transportation systems.

Since April, MHI has been reorganizing its business domains with the aim of pursuing group synergies and radically reforming its commercial aircraft and commercial ship businesses, in a quest to strengthen its global competitiveness and engineering operations.

In June, MHI reached an agreement with Oshima Shipbuilding to form a commercial shipbuilding alliance. The agreement focuses on development of new ship designs and technologies, standardization of design and construction and efficient shared use of tools and equipment.

The alliance follows on from a previous agreement reached at the end of March between MHI, Imabari Shipbuilding and Namura Shipbuilding. Contracts for specific projects will be decided on an individual basis.

This news is a total 564 time has been read
Tags: Mitsubishi Heavy Industries Splits Shipbuilding Business