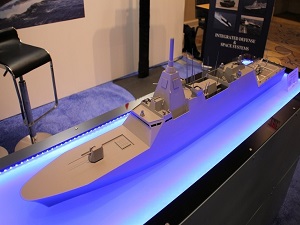 Mitsubishi Company representative believes this design could match potential export customers, for this reason the Japanese company is showcasing its design at Euronaval 2018. According Mitsubishi Heavy Industries brochure, the Future Multi-Mission Frigate is set to have a standard displacement of approximately 6,000 tons, a length of 130 meters and width of 16 meters. The top speed is set to be in excess of 30 knots.

According to our first analysis of the scale model showed at Euronaval 2018, the vessel will be fitted with a BAE Systems 5 inch Mark 45 naval gun system, 16x Mk41 VLS cells for surface to air missiles, 8x anti-ship missiles (likely XSSM because of the shape of the canisters), a Raytheon SeaRAM short range missile launcher on top of the helicopter hangar, torpedo and decoy launchers.

As far as sensors are concerned, the Future Multi-Mission Frigate is fitted with a multi-function radar (in an integrated mast possibly from NEC), Electro Optic sensors, variable depth sonar and passive towed array as well as a hull mounted mine countermeasure sonar. 30DX will be able to deploy and recover UUV, USV, helicopter as well as sea mines.