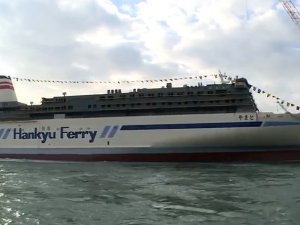 The new vessel, named Yamato, is scheduled for delivery in June 2020 after completion of rigging work.

Together with its sister vessel Settsu, which was christened and launched last August, the Yamato will serve on the company’s Shinmoji-Kobe route.

Cargo handling facilities consist of two side ramp/doors and another ramp/door at the stern.

Mitsubishi said that the vessel’s design allows for a roughly 6% increase in energy efficiency when compared to earlier vessels, due mainly to the adoption of a new, optimal hull type.

The Yamato is also outfitted with an exhaust gas cleaning system (scrubber) that controls airborne emissions of sulfur oxides (SOx) as a solution for the IMO 2020 sulphur cap.

This news is a total 188 time has been read
Tags: Mitsubishi Heavy Industries.