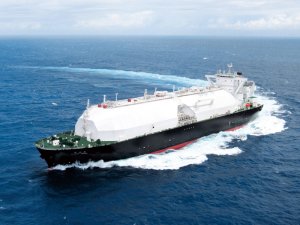 The JV company between MOL and Chubu ordered two LNG carriers, a 177,000 cbm vessel to be built by Kawasaki Heavy Industries (KHI), and a 180,000 cbm Sayaringo STaGE (Steam Turbine and Gas Engines) carrier to be built by MI LNG Company, a JV established by Mitsubishi Heavy Industries and Imabari Shipbuilding. Both vessels on order are scheduled for completion and delivery in 2018.

The four carriers will transport LNG from the Freeport LNG Project,Texas, U.S.A., to Japan. NYK Line signed 20-year charter contracts with Chubu for the two carriers, while MOL did not specify the duration of its charters.