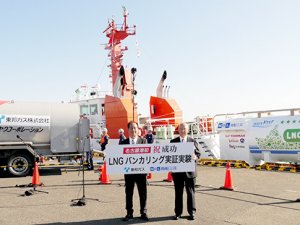 The duo conducted a demonstration test to supply LNG to the LNG-fueled tugboat Ishin in the abovementioned port.

As informed, the test confirmed that LNG can be safely supplied to vessels at the Port of Nagoya.

LNG was transported via truck from the Toho Gas Chita-Midorihama LNG Terminal and supplied with a truck-to-ship system to Ishin, berthed at the Port of Nagoya’s Garden Pier.

Also cooperating in the demonstration test were Niyac Corporation, MOL Marine and Nihon-Tug-Boat.

“Based on the findings of the demonstration test, Toho Gas and MOL will continue working to reduce the environmental impact of the maritime industry by promoting the use of LNG fuel by vessels calling at the Port of Nagoya,” MOL said in a statement.

Back in January 2018, MOL ordered the LNG-fueled tugboat from Kanagawa Dockyard. Ishin was delivered in late February this year and started operating as the first LNG-powered tug serving Osaka Bay.

This news is a total 644 time has been read
Tags: LNG Bunkering, MOL, Port of Nagoya