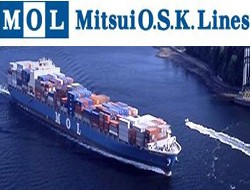 Mitsui O.S.K. Lines Ltd., the world's largest operator of iron-ore vessels, halted new orders for the ships as demand for steel drops. The company is scrapping up to seven iron-ore carriers and may not renew long-term charter contracts, Masafumi Yasuoka, a senior executive officer at the shipping line, said in an interview in Tokyo recently. Mitsui O.S.K. may slow its expansion plans as economic growth in China, the world's biggest steelmaker and buyer of iron ore, expanded at the slowest pace in seven years last quarter. The Tokyo-based carrier had planned to increase its fleet of iron-ore carriers by 28 percent over six years to 160.

"We may fall slightly short of the target," said Yasuoka. "We're putting new ship orders and decisions about contract renewals on hold." He declined to say by how many vessels it may fall short of its goal.

Mitsui O.S.K. forecasts profit will decline for the first time in seven years in the business year ending this month as shipping rates have tumbled. It made over 90 percent of its operating profit from transporting commodities and cars last fiscal year.

Net income will drop 32 percent to 130 billion yen (US$1.3 billion), it said in January, reversing an earlier prediction for an increase.

The shipper also is suffering from plunging demand for automobiles and transporting fewer cars made by Toyota Motor Corp. and other Japanese automakers, who are slowing production and using less steel.

Mitsui O.S.K. is also studying the effect of new iron-ore ships being launched this year and next to decide whether there will be an oversupply of such vessels, Yasuoka said.

Coal, ore and grain transporters with a combined carrying capacity of 294.8 million deadweight tons are currently on order at shipyards worldwide, according to data from London-based Drewry Shipping Consultants Ltd. That's equal to 70 percent of the present fleet. Most of the new capacity, 38 percent, will be delivered next year.

The shipping line had 874 ships in its fleet at the end of March, 13 percent more than rival Nippon Yusen K.K., the world's second-largest merchant fleet after Mitsui O.S.K.

This news is a total 832 time has been read