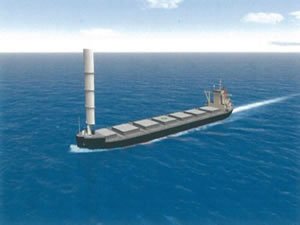 Construction of the vessel will start at Oshima Shipbuilding aiming to start operation in 2022.

The introduction of the Wind Challenger is expected to reduce emissions of greenhouse gases (GHGs) by about 5% on the Japan-Australia route or about 8% on the Japan-North America West Coast route, in comparison with a conventional vessel of the same class.

MOL and Tohoku Electric Power plan to conduct more verification tests on the system’s GHG reduction effects toward the 2022 target date for the new carrier to begin operation.

MOL and Oshima have been working on the implementation of the Wind Challenger Project for two now with the aim of launching a newbuilding vessel equipped with a hard sail.

The Wind Challenger Plan started in 2009, an industry-academia joint research project led by the University of Tokyo.

In January 2018, MOL and Oshima Shipbuilding took charge of the plan and now play a central role in this project.

The system converts wind energy to propulsive force with a telescopic hard sail.

The duo won an Approval in Principle for the design of the hard sail system from ClassNK back in 2019.

Obtaining the AIP marks the completion of the initial design related to the sail structure and controls, the companies said.

The long-term goal is to develop a widely accepted solution to achieve the IMO target in combination with other measures to reduce GHGs by equipping vessels with multiple sails.

The project intends to use its rigid, collapsible sail technology developed under the Wind Challenger project on vessels capable of capturing that power during high wind periods to generate hydrogen for use during lower wind sections of the voyage.

The project team aims to give a new and first step to realize a decarbonized and hydrogen society.

This news is a total 7824 time has been read
Tags: MOL , Oshima Shipbuilding , Wind Propulsion