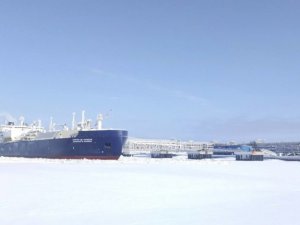 MOL signed a Memorandum of Understanding on Monday with the Far East Investment and Export Agency under the Russian Federation for the Development of the Far East to cooperate with each other on the development.

Japanese shipping company Mitsui O.S.K. Lines has reached an agreement with the Russian government to help develop maritime shipping along the Northern Sea Route and the Russian Far East as melting ice in the Arctic makes commercial shipping in the region a more viable option for transporting cargoes from between Europe and Asia.

MOL signed a Memorandum of Understanding on Monday with the Far East Investment and Export Agency under the Russian Federation for the Development of the Far East to cooperate with each other on the development.

MOL has been working with Russia on the chartering of vessels for Russia’s Yamala LNG Project, the world first large-scale energy project that exports LNG cargoes through the Northern Sea Route. MOL’s first of three icebreaking LNG carriers for the project, named Vladimir Rusanov, is slated to enter service at the end of March. MOL has also been working on feasibility study with PAO Novatek, the largest independent gas producer in Russia and the main shareholder of the Yamal LNG project, which is aimed at establishing an LNG transshipment terminal and marketing complex in the Kamchatka area.

“With the reduction of ice in the Arctic and the design of new ice-breaking commercial vessels, the transportation of Arctic natural energy resources has become commercially viable,” MOL said in a statement announcing the MoU. “In the Arctic area, new projects are following in the steps of the Yamal LNG Project. Asian countries, including Japan, who import energy resources, will welcome the access to new energy sources, particularly with respect to energy security, and it is expected that there will be a significant trade growth in energy delivered through the Northern Sea Route.

“Moreover, for trades between Europe and Asia, compared with the traditional route via the Suez Canal, the Northern Sea Route is a much shorter distance, which equates to less time, and reduced costs and CO2 emissions for transportation. It is therefore expected that there will be an increase in the trade of goods, in addition to energy resources, through the Northern Sea Route in the future,” the statement added.

“We hope that MOL will be effectively using the Northern Sea Route for transporting cargos to Japan and other Asia-Pacific countries and jointly we will be able to attract significant investments into the Northern Sea Route infrastructure development. The Agency is ready to help MOL in implementing all its current and future projects,” commented FEIA General Director, Leonid Petukhov.

This news is a total 519 time has been read
Tags: MOL to Develop Northern Sea Route Shipping with Russia