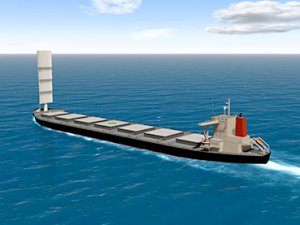 The decision comes after it was recently confirmed that a vessel equipped with the Wind Challenger is acceptable in port facilities of the coal thermal power plants owned by Tohoku Electric.

Both companies plan to verify the system’s impact on discharging operation and calling in/out at coal unloading port facilities, its effect on reduction of greenhouse gas (GHG) emissions while the vessel is underway, and other factors.

The duo eyes launching the world’s first vessel equipped with the Wind Challenger after 2022.

Wind Challenger is a telescoping hard sail to convert wind energy to propulsive force and is studied in the Wind Challenger Project in which MOL takes part as a leading member.

As explained, the installation of the system on merchant ships has the potential to significantly reduce fuel consumption, which in turn reduces the environmental impact of vessel operation while improving economic efficiency.

Earlier this year, MOL and Oshima Shipbuilding obtained approval in principle (AIP) from classification society ClassNK for the design of the hard sail system. Obtaining the AIP marked the completion of the initial design related to the sail structure and controls.

The project started back in 2009 with the Wind Challenger Plan, an industry-academia joint research project led by The University of Tokyo, and from 2013, the team has been chosen to receive Subsidy for Next-generation marine environment-related technology research by the country’s Ministry of Land, Infrastructure, Transport and Tourism. In January 2018, MOL and Oshima took charge of the plan.